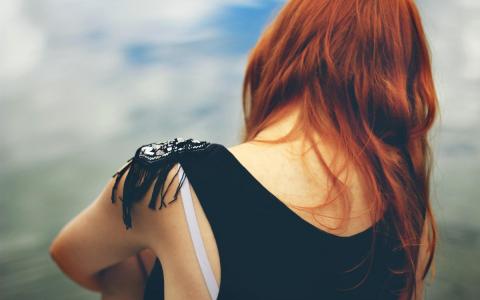 Redheaded girl, who sits and waits,
For the days of cold to be over.
Whispers of other student's rates,
On the always unnoticeable cover.
The pain she feels is always real,
No matter the ending scene.
A simple smile to another skipped meal,
Is becoming her daily routine.
The jacket she wears every day,
Barely hides the bruises.
It's thin and old, slightly gray,
The only one she chooses.
During the day; around friends,
She fakes a laugh and a smile.
The depression inside will never end,
That's just not her style.
And at night; in bed alone,
She sheds a single tear.
For those things she's come to known,
Are starting to appear.
She's frozen now as she stares,
In her bedroom mirror.
There's a man; a smirk and glare,
That sparks a certain fear.
Her breath so stilled begins to quicken,
She feels the lost of space.
Her stomach then starts to sicken,
By his disgusting face.
Her eyes are closed; body shaking,
As she hears his murmur.
Every wall she built is breaking,
She escapes to the corner.
She curls into a tight ball,
When she feels his touch.
Presses herself against the wall,
The attack becoming too much.
An hour passed before she's calm,
The room is again the same.
She rubs her eyes along her palm,
As she hangs her head in shame.
Who knew the effect of being raped,
Would haunt a mind for years?
Plays in her head; like a tape,
Adding to all her fears.
Poetry Slam:
Slam Behind the Curtain Scholarship -- CLOSED
Guide that inspired this poem:
How to Enter a Poetry Contest

You liked my poem? Thank you so much. It would mean a lot to me if you'd share my poem. Thank you for giving it a chance.