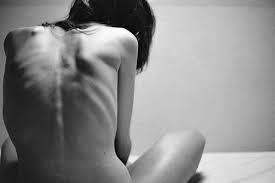 Four out of five children are afraid

of being one word - fat.

and six out of one hundred people with anorexia

kill themselves to be what they see in the media,

who would kill or be killed to be perfect . . .

ten percent are ten or younger,

thirty-three percent are between eleven and fifteen

forty-three percent are between sixteen and twenty, and

This is proportionate to the eight million who have

struggled with this mental distortion for on average

will make you better.

with “unhealthfully skinny”. I could hold eggs in

your collarbones and hang ornaments from them

if I tried, and wrap both of my hands around your

thigh so my fingers touch you, are a living skeleton.

Your hip bones are like daggers and your ribcage

is more like a bird cage. You need to eat I just don’t want

more than this. You were beautiful before this

demon possessed you and sucked the flesh out of you.

to your body, even in pictures you still

look far from triple digits on a scale.

as if there’s a vacuum inside you sucking in

your stomach so I can see through you. Your

thigh gap is the width of four fingers. You’re

getting so pale, I wish you could see that being

nothing but skin and bones will not gratify you,

not make you happy just one more

one more pound. . . until the wind

I wish you were still here to

hear me tell you, you were beautiful

from the very beginning, one hundred

and twenty pounds and thick hair. . .

clasped in your hands, as fragile as you