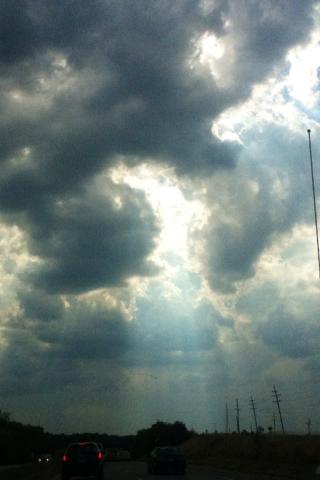 A 'ray of hope'? B.S.
'Rays' of hope can only be seen. That's what someone else has, that one might observe.
This isn't necessarily seen.
No, for me this is only felt. Swings to and fro.
A rope, strung out so far, and hung on to
for so long,
So long...

Too long? Is that the problem?
It's now a few strings.
Now a couple of strings..
Now a single string...
A few strands...
How many left to go?
Before it snaps?

What'll snap first--my willpower, my work ethic, my determination, my diminishing ability to physically pull myself out of the dust, my intent... or my hope?
Not my work ethic. Not my determination. Not my diminishing ability to drag myself up off the ground. These were things I was taught. Or things I was lent. As long as I'm in the graces of a Patron, these are the things I'll keep--thank-you.
Then it'll be my willpower or my hope. Two of the greatest, most powerful strengths a living being can have.

But give me one reason--no, less than one, but greater than none--and Hope I'll have. Willpower? It'll work because I--or We--will find a way to make it work.

'Less than one, but greater than none'. Is that how it is? Some nights.
Before the fight? Hell, no.
And fight there will be. Not between you or me, no, this isn't a fight of violence.
It's a fight; of willpower and hope. To not break. To not snap those last strands--however many there are left, now--however thin.

I have that willpower. I have that hope. I had a Fortress, I had a rope. I had the tools, the means and intent; I had that drive, Heaven sent. It hasn't gone completely yet, because I still breathe in. I can take it, whatever it is, because if I don't I'll never fight again. Hope, Willpower, Determination... they fight as a team, together, play together, and though it would seem that they disappear together
I know they only become transparent to a heart that wants to cry--especially when the eyes won't let it.

At that point, what good comes from reaching out with your hands? You might find, by stroke of luck or fate, what you can't see and need to hold on to. But better than that, just breathe it in. Breath slowly, deeply, thoroughly, as it were, until the hiding strengths lingering and woven about in the fabric of the air can be inhaled; absorbed; attached to your blood cells--and carried throughout you.

And what of a 'ray' of hope? If you see it, remember it's color, it's unforgettable appearance. That vision in itself reminds that hope exists. You can see it sometimes, cascading through the clouds on an almost-rainy day.