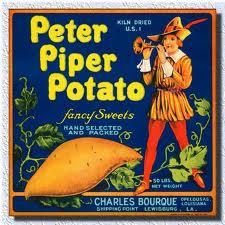 If Peter Piper picked a peck of pickled peppers,

But what if Peter had more pecks to pick for the pickled peppers?

Listen, this is a prudent problem.

Predominantly persuading a nation that they need to pick a peck of pickled peppers.

Should we say stop?

Profusely professing our indecisive panned existence into one peck for the pickled peppers that we have not really picked.

But we can not.

Piecing together anonymous thoughts of predatory nature colliding in peppers that are not pickled, but periodic and passive.

For once, it is not, but the regular joe that Peter Piper is and can be to pick the not-so-maybe pickled peppers. What if Piper Perabo, Billie Piper, and Piper Laurie decided to pick a peck of peppers?

Are they all Peter?

Are they all looking to peck a pick at some random pickled peppers? How would they know it was safe?

Piper Perabo, Billie Piper, and Piper Laurie all have separate pickled peppers to be picking when they can peck to see if they are ready.

Green, yellow, red, enough for all of them and us. There is no one Peter Piper picking a peck at these pickled peppers, it is only all of us that need to pick