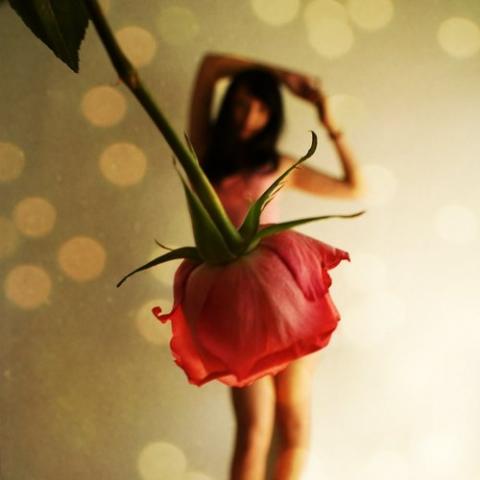 Let me tell the tale of a frail child,

damn wild but her trouble led her hell bound,

picture her with the prescription havin staredowns,

pictured her in her depiction only wears gowns.

Hair down with a glared smile,

the picture in the mirror is crystal cleared how

she tears down her fears loud and she's weared out.

She loves only the homies want the holy matrimony,

chariots and songs she wailing out singing sonatas.

she only can feel hollow, and comfort in pill bottles,

hasn't relieved ills so her will is to still swallow,

until she can feel "period" something she feels follows.

So much tears she grows gills wallows through still water,

a lot of her still bothers wish love could kill mama

Separate her from the man she made a crown for,

left her hands in her knees soakin under downpour,

and a man became the reason she'd lower her head and frown for,

and the cameras sayin cheese is the only thing that she'd smile for.

Damn what'd she do that for!

Left her alone and at war,

met her a long time ago,

what does she wear the mask for,

and that is all she could ask for.

Many callers her problems got this woman to attract more.

But then she kissed the frog,

met a prince at the ball,

led her into her fall

and not a damn thing was solved,

fed into all the lies

and then she's way too appalled

when she lived in a fairytale

and now she lives in withdrawals.

This is a warning for every one out there looking for prince charming,

there's hurt and fall, cursed with arousal and searching for frogs,

Boxes of options stop being dropped there's a lot you can offer,

Another story got a lot more,

this one is of a sinner calling god for,

a start of a new beginning tryna mop floors,

clean up her act however but she's not for,

the wait, work, or anything to do better

wearing thongs and not scared to show em,

for the moment feel her presence,

whoever she gives the box to

She's coming between the closest,

spreading fire against them, burning with inhibition.

but no judgement passed,

she worships and is in love with cash.

plenty males, pleasure them "cleaning up her act".

scheming, cleaning semen out her snatch,

That's Jazzy for you.

A maneater and homewrecker.

She's the baddest for you.

Turn a man into a pig before he can say amen,

Turn a man from his religion before you say pagan,

Transition to other women

whose men couldn't help from getting

so tempted they all forget

that their princess is dancing with them.

They're hoppin into the picture

she kiss them turned them to princes,

but then when they go back to Mrs.

They're draggin something else with them.

And then they kissed their princes,

road to the end is short,

frogs turned into princes to toads,

wanted them to themself

Jezebel screwed their men to scorch

you knew he was a frog before,

and life wasn't a Grimm's story.

This is a warning for every one out there looking for prince charming,

there's hurt and fall, cursed with arousal and searching for frogs,

Boxes of options stop being dropped there's a lot you can offer,

but thoughts never cross you're not Calliope what are ya'll kissing frogs for.