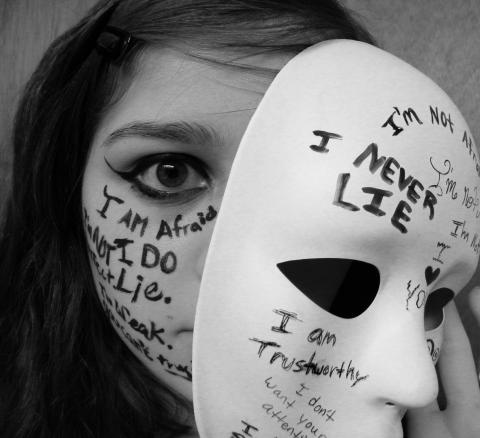 Behind the cutain is a monsterous beast

On lust on hate on gossip on love

Now she's in a bind that she can't get free of

Beneath the disguise lies the eyes

Of a frustrated girl who couldn't compromise

She struggled and scrambled and wouldn't give in

She had to be perfect, she had to fit in

She Hid herself and plastered on a face

Tried to make herself someone that couldn't be replaced

Little did she know that she always was

but still She never stopped to think, never even paused

She saddened and sickened and it stuck

She was tired, she was wasted, ..absolutely done.

So she gave up her life and stole herself a gun

Pressed to her temple was the foreboding barrel

Waiting to fire, to make her body steril

And then she realized what she couldn't do

Was pull the trigger and let the bullet through

So she cried out her heart and put the gun down

took off the mask and her true soul was found

Now she realizes that she doesnt have to hide behind makeup, fashion, or masks

She is perfect the way she is, to be yourself is not a task

I've been that girl so many times before

Now I know what she knows. So I won't go back. Not anymore!