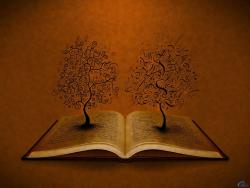 Metaphors are a great tool to use if you want to liven up your poetry, and make people really think more deeply about what you write. Check out these poems that make great use of metaphor, and keep reading to find out what exactly a metaphor is, and how to use one correctly.

My mistress' eyes are nothing like the sun;
Coral is far more red than her lips' red;
If snow be white, why then her breasts are dun;
If hairs be wires, black wires grow on her head.
I have seen roses damask'd, red and white,
But no such roses see I in her cheeks;
And in some perfumes is there more delight
Than in the breath that from my mistress reeks.
I love to hear her speak, yet well I know
That music hath a far more pleasing sound;
I grant I never saw a goddess go;
My mistress, when she walks, treads on the ground:
And yet, by heaven, I think my love as rare
As any she belied with false compare.

One day you finally knew
what you had to do, and began,
though the voices around you
kept shouting
their bad advice-
though the whole house
began to tremble
and you felt the old tug
at your ankles.
“Mend my life!”
each voice cried.
But you didn’t stop.
You knew what you had to do,
though the wind pried
with its stiff fingers at the very foundations,
though their melancholy
was terrible.

It was already late
enough, and a wild night,
and the road full of fallen branches and stones.
But little by little,
as you left their voices behind,
the stars began to burn
through the sheets of clouds,
and there was a new voice
which you slowly
recognized as your own,
that kept you company
as you strode deeper and deeper into the world,
determined to do
the only thing you could do-
determined to save
the only life that you could save.

The Passion of Autonomy
Life forgot my passion there And handed me the key; For what possesses better snare Of curiosity?   The key, ornate with...

Exhaustion
My heart belongs to you I’m confused, lost, and broken Help me, help me, help me Bruised from the massacre you left on my...

Poetry about Employment and Jobs