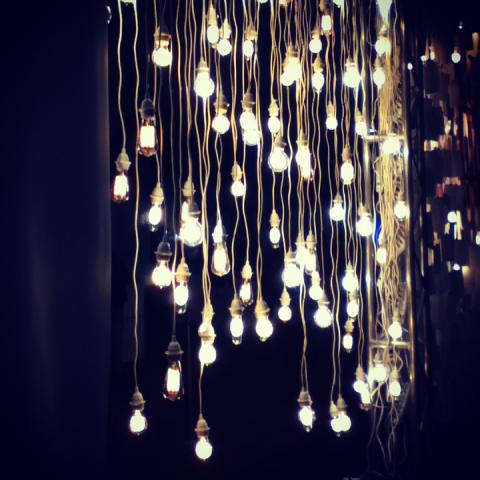 I believe in life, the present moment, and the pursuit of contentment.I believe in wringing my days like washcloths,in savoring good food, in embodying love with sex.I vow to not squander my minutes the way people feed dollar billsto vending machines, the way young men are fed to Afghanistan.I believe in love that dares itself to lick a flag pole in winter, hangupside down from monkey bars, play ding-dong-ditch.I believe that pick-up lines are overrated. [I hope you agree.]I believe in commitment but I also believe good intentions can change.That being said, I believe in the value of a promise made and kept.I believe in honesty and self-awareness.I believe that floating on one's back down a river is not a waste of timeand if tears won't come, onions help.I believe stage performances are better than movies - always -and candy does not need to be a rarity.Go ahead, inform me that the calories are going straight to my thighs.I've been told I have great legs, so it must be working.We live our days far too quickly, agenda junkies.I believe in dipping the good days in honey so they taste sweeter.I believe that if we're honest, we spend too much time with the peoplewho can't even remember our birthdays and never devote enough timeto the women who were there at our birth days.I believe that life begins at conception but that not everyoneis ready to become a parent.I also believe that condoms only work if they are taken out of the box.I believe that I don't really know myself because I'm too busy tryingto mimic someone else.I believe the moon is more beautiful than the sun even though it's onlyreflecting the light the sun already has, and while I'm at it, why don'twe ever watch the moon set?I believe staying up late goes against my inner clock but I also believethat to fit in with my peers, adjusting my sleep schedule is necessary.I suppose that means I believe in fitting in, too.I believe that exercise is important but that some beliefs are betteradmired from a distance.I believe I look really, really good in lingerie, but that appearancesshould never justify exploiting third world laborers.I believe in going green, even if it means spending the little green I haveon organic, fair trade, and local.I believe that love should not be shared equally among many but ratherlavished on a spare few.After all, I can't save everyone. [Some days, I can't even save myself.]Despite this, I believe in the incredible value of love,and of linking my soul one day at a time with another person's,someone who also gives a shit about living fully.I believe death is impossible to understand, but I still find myself pokingit with a stick.I believe in god, but I've accepted the limits to knowing god personally.It is peace I am grateful for now that I've stopped shucking questionsas if they were ears of corn.I believe that this credo is surrendering twenty years of thinking I knewwhat I knew.I simply believe that I do not know what I know, only what I believe.