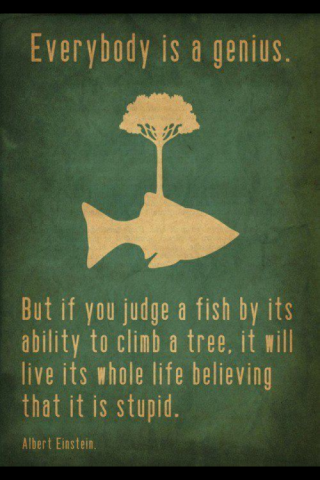 Einstein may have once said
"Everyone's a genius.
But if you judge a fish by
It's ability to climb a tree,
It will live its whole life
Beleiving that it's stupid."

There's more truth than you think to that.

Kids these days don't like Art.
They think STEM is all they've got
To prepare for because our jobs
Beg for more people with more pay.
But they can't pay people who they
Have to save, can they?
They can't pay for the medication
Their days of needless labour made.

We can't take having numbers being
Forced into our heads like motherboards
While we're never taught how to vote,
How to talk, how to help someone who's choking
On something that's hurting them.
And what's worse is the hate.

What's worse is the hate from our parents
For not sucking it up, for not keeping quiet,
For not being stressed by the six hours of work
On top of a job to help us ready for college
That we need to survive once we turn eighteen
Because apparently, that's a little mean.

My generation is more open about ourselves
And expressing who we are by what we learn
But that's somehow worse, somehow a curse
Compared to being put in uniformity
Compared to having tests take over our time
Necessary to learn how to use the quadratic formula right!

Teaching a fish to climb a tree
Is like telling a math nerd their test
Is to play a song on the cello
When they've never played before.
This American Way of getting better
Is only leaving children behind.

Poetry Slam:
I Am... Scholarship Slam - CLOSED
This poem is about:
My country
Poetry Terms Demonstrated:
Assonance