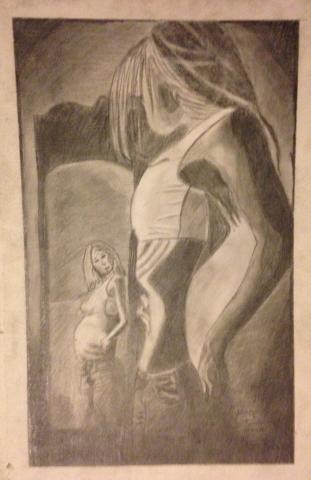 Eating was hard, breathing was hard. But living was the hardest part.

The darkness was suffocating, and in chasing shadows, I mistook dreams for disorder. I starved in a body fueled by empty promises. And in all attempts to reach peace with my skin, I neglected it for not being fit enough to die.

I could count calories with precision. I could avoid mirrors like the plague. I knew secrets were concealed best in silence, and I knew emptiness by contrasting my life to those embedded by the fullness of light.

I could starve my body, succumb it to nothing. I could be confined in a box. Simplified in composition; diminished in dimension. Yet as I practiced the rules of beauty, I felt nothing but hollow. For in the depths of this disorder, living was always the hardest part.

I lived a slave to scales and silhouettes, and I fed an illness I ought to have destroyed, and I starved seeds I ought to have nourished. I lived by the taunting tales of anorexia, I was seesawing at the lines of ambivalence for years, but two years ago, everything changed. These discoveries did not unravel in passive patience. These moments did not manifest in an instant.

I remember my hands lay cold on my chest. I tried to feel for my heartbeat, but the rhythm wasn’t promising. I remember always being cold. Despite the layers of clothing that wrapped around my body, I didn’t know warmth and all of its colors.

Nothing stopped the sun, but rather something stopped me. Sensations were suppressed; Numbness ruled. There was no fear greater than a sensation beyond the scope of my knowing.

Caressed in a comfort astray from chaos, I could write my name for you all. But tell me what fire is, and I wouldn’t know. Because when you dance in the winter for so long, you tend to forget.

It was 2 years ago that I was searching through memories, anything to remember who I was behind the shackles and chains.

And as I did, I saw a child. She was dancing as if rooms had no walls. She sang as if the world was her stage. And in between the bites of birthday cake and the candles she blew, she was dressed in bows and smiles, and she was beautiful.

I was killing this little girl, a girl that did nothing wrong. Her dreams were silenced for sins she never made. Her body was starved for faults framed in deceit. And all she ever wanted was to feel beautiful.

That girl was me.

I made a promise to the girl I was: That for every hospital gown that draped over her body, for every liquid that dripped into her veins, for every pill-coated therapy, every curtain that concealed, for every bite she never took, and for every pound she wished away. For the girl who suffered in silence, who craved nothing more but the strength she wears today, and for the strength she has yet to endure.

My promise is this; I will forever fight for her growth.

5 years in battle, and the only victory in my life was that of Anorexia’s reign. Because as long as breath filled my lungs, there was always more to lose; And had I won, I wouldn’t be there to claim my prize.

The harsh realization unfolded as I stared into that little girl’s eye; I saw injustice I could no longer endure. I tolerated no more. The changes were chosen. My decisions were driven.

But how on earth was I to escape all that I knew? How am I to escape buried beliefs and tragic self-love stories? How am I to reap wonder while I fear the path my feet must pace? How do you run away from, if you don’t know what you’re running for?

Will I allow my suffrage to continue, while I batter my bones and fight my flesh? Will I point to perfection while I pinch at my skin, and slash at my presence and the spaces I fill? Will I fear growth, or will I fight for it?

My answers were close. They lived in my heart. All I had to do was listen. I learn this each and every day: The same heart beats in both bodies, old and new, only now the rhythm is promising.

I made a promise; I promised to honor my home.

I lived in my skin, and for the first time in my life, it was the only place I wanted to be. Bite after bite, intents nourished and seeds planted. Step after step, Ideas manifested and flowers flourished. Numbness wins no more.

In courage, I gave her my hand and I promised her the world she deserved. I fed her, I cared for her, and I loved her. She thawed with forgiveness, and flourished with gratitude. Her passions were pursued, her vulnerability was empowered. And in all her uncertainties, she found a safety that was grounded, a safety far more compelling than anorexia could ever be, and she held her own hand.

Either anorexia died, or I would, for there is no middle ground between life and death. No passing time and wishful wonders, for existing and living are two different things; when I let go of anorexia, I had to let go with both hands.

And I whisper a promise I will always keep;

I love who I am, for I fought to become her.

My life is an ongoing story, just like yours. But I’d rather not lose you in details. While a picture may speak a thousand words, my journey speaks louder.

There were no quick-fixes to conceal my wounds. No prescribed pill to paint smiles over my pain. There was no dose that could drain a burden that bore from within. And while tales may be left untold, I pray the principles compel you forward.

I pray that loving yourself, the way I do today, entices you in every way it can. Defy fears, but never defy your growth; fight for it instead.

Poetry Slam:
All I Need Scholarship Slam - CLOSED
This poem is about:
Me
Poetry Terms Demonstrated:
Verisimilitude