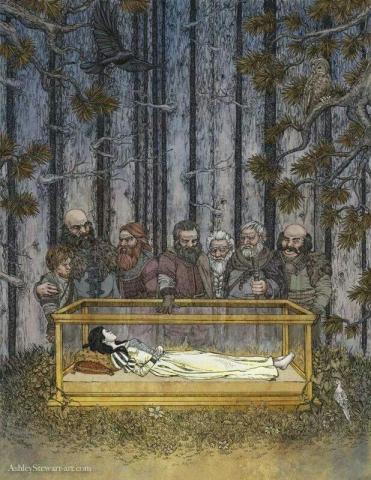 A princess sat inside a tomb

-a crystal coffin set by dwarves

beneath the light of crescent moon-

They watched her blink her glassy eyes

And turn her perfect head

-the dwarves, they knew that fair Snow White,

Yet in her coffin she remained,

Not doing much at all,

She wasn’t fazed by lessons, teas,

Nor the upcoming ball.

With cheer and wit and light,

But then a poisoned apple broke

The spirit of Snow White.

The poison stripped away her will

To smile and carry on,

One day the dwarves, they realized

So they placed her in a coffin,

And prayed that some act of true love

Would come to break the spell.

Snow White gazed out at the world

And felt the urge to cry,

She saw that if she stayed too long,

Time would pass her by.

The dwarves would learn to carry on,

Snow longed to live a life with them

Before they all grew old.

It wasn’t easy as it seemed

To sing as she’d once sung,

How could she, when the poisoned fruit

Still rotted on her tongue?

But she couldn’t wait for “true love’s kiss”

To pull her from her shelf,

She realized, if she wanted out,

She’d have to save herself.

So Snow White worked up all her strength,

Became the hero she had to be,

She spit that apple out and then

She clawed her own way free.

It wasn’t ever quite the same,

Saving yourself each day is tough,

But Snow White lived, and she was loved,

And all that was enough.

Poetry Slam:
Once Upon a Poem Scholarship Slam - CLOSED
This poem is about:
Me
My community
Our world
Poetry Terms Demonstrated:
Rhyme Scheme