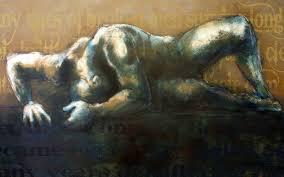 Coming up to 7 years of age was a magical time. We smiled,

laughed, and life sailed swiftly by.

Getting to the old age of 8 saw a massive change ahead. My

guardian angel was often missing, replaced with an absent father,

social services, and home helps instead.

Figuring out what a nervous breakdown was became the schooling

of the day.   The hush hush in the family only added to the shame

Crazy moments happened during the geriatric ages of 9 & 10,

when my beloved mother came back from hospital, and suddenly

she was gone again.

By this time I'd hardened by anticipating the psychological falls.

The pauses in conversation, lapses in judgement, actually said

that told me something was amiss watching you asleep.

were sliding into a place unknown.

Silently I retreated into a quiet ball, never knowing who to trust

during this difficult fall.

At the tender age of 11 you returned from another hospital stint.

Fresh faced and happy you promised us 'that was it'.

Relieved to hear my mother was back for once and for all. I

hugged, cried and kissed you  and said this

was the best time of it all.

Only a few days later to see that you'd gone missing again.

It was cold and snowy outside, even the press made a noise.

Then on the day I'll never forget I got pulled out of school.

Feeling perplexed and bewildered I got hurled upstairs.

Seeing my great aunt uneasy told me something was amiss.

On hearing my mother was dead is something I'll never forget.

How could of this been possible when last week she was there.

Telling me and brother she loved us and that she'd always care.

Everyone around was silent to how she actually went.

On reading the local inquest report, a week later, did I come to

Understanding how her body was hidden for days by

the January snow, covered for days near the rail way tracks,

seems how we didn't know.

A feeling of utter isolation engulfed my tiny innocent soul. A part

of me really died that day, the legacy won't ever go.

Even at middle age my journey has never really stopped.

Many a story I could tell you of how my life has gone to pop.

Darkness and clouds, and constant tiredness, were what I came to

This went on for an eternity - no wonder I wanted to go.

Then one day I really slipped, not a physical fall.

In my mind I nearly broke, accummulated stress did it all.

A hospital visit later told me what I had to do.

Visiting certain chapters from my darkened past revealed

many buried emotions of an innocent boy.

Little wonder my adult life has been volatile without anyone

Getting close to someone hasn't been easy with all this emotional

debt. Something had to be worked on if I was to be set free.

Public speaking, hypnotherpay and learning poetry, is a

Yet challenging some deeply held beliefs needed a slightly

King Henry, Larkin, and Elisbath Browning was some of the

medication I adhered too.

Repetition, hard work, and being challenged was really what it

I'm still not out of the maze just yet but the borders I can see.

It seems like I can finally express myself, its great to finally

I have this compulsion to write out stories, to create content a new,

Hopefully my tales can be worthy to the other unlucky few.

If I can help someone avoid pain like I did then maybe, just

maybe, I can reserve a place in heaven next to you.

This poem is about:
Me
My family
Our world
Guide that inspired this poem:
Mental Health