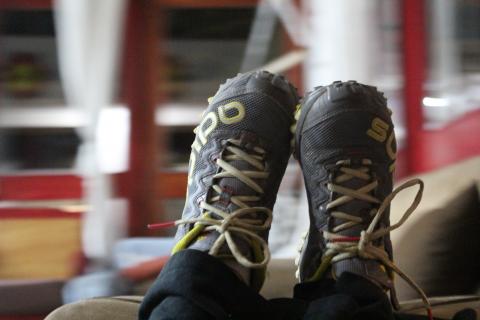 I pieced all the evidence together and found

that I, most likely, came from a ripped up piece of latex,

one snowy summer night in a cabin down in New Mexico.

Yet, though I came from broken things and with unexpected news,

I came also with love.

I mended a shaky unit, kept two parts of a whole together.

So, I guess you could say, I once was glue.

One day, when my world was more sturdy,

I collected myself and stopped being glue.

Quickly searching for a new consistency, I turned into a parrot.

Finally, something living and breathing,

and though it was very exciting back then, I have to say now

that it all seems very dull in the long run.

I did not much more than mimick the larger beings around me,

though I did do a lot of playing with smaller creatures and hopping around.

When I grew tired of the grubs and feathers,

I stretched out to become one overgrown sea sponge.

With eyes even brighter than Bob's

I ate up all the words and images around me.

My favorite things to absorb

what lies outside of our atmosphere

and beneath our oceans.

Being a sea sponge, believe it or not,

So, naturally, my shape remained porous and oblong

for quite some years.

Even after I've morphed

I can't seem to get rid of the ins and outs

of my mind, body and soul.

That's fine, though, because they come with benefits.

Now I can, not only take in and absorb,

Since then I have taken more abstract,

Like that of a friend, of a lover, of a daughter,

of a supporter, a follower, a leader,

a mentor and a mentee.

that through all those years and shapes,

that I once turned into a skyscraper,

only to shrink into a pretty pair of shoes,

Though I strongly doubt I'll ever turn back

into those dainty, black pumps,

For quite some time now,

with my shape and size.

But recently I've been reduced

Turning North, then South by Southwest

daily, even twice in the same hour at times.

My friends and family all say,

that this is the best shape,

that many open doors are waiting,

but I really am getting awfully dizzy.

See, it's not easy having no clear direction,

if all the freedom in the world

is simply not enough.

Some days I feel like the more of it I have,

the more I feel chained down.

Some days, when I've been spinning around

I consider turning back into the parrot,

but we all know that's a silly thought,

and if I'd listen to my co-creators

maybe I'd be off the roof by now,

a wise, old crow once told me

that we all take the shape of a weathercock,

some even take it more than once in life,

and we usually stay that way

The tired crow said to me, too,

perhaps when I least expect it,

maybe before I am even ready.