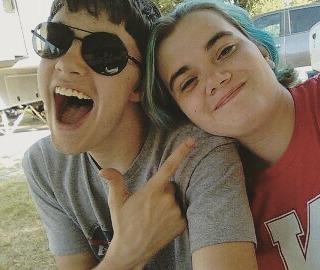 It sets our hearts aflame, makes us brighter, radiating stars in the crowded galaxy of existence.

And even when you think it's absolutely perfect, it has it's ups and downs, and that's perfectly okay.

But, over the years, I've learned that sometimes, what you think is love, love that will turn you into the shining star you've always wanted to be...

Is entirely the opposite.

His name was Bill. 19 years old, a senior in high school.

We knew each other pretty well, shared quite a few common interests, and so, our parents let that age gap slide.

Maybe I was just young and stupid, maybe our priorities just weren't in the same place.

But, I quickly realized that something just wasn't right.

We went to Homecoming together.

I was having fun with my friends, not necessarily ignoring him, but, not giving him my undivided attention, either.

He became extremely possessive, demanding that I stay by his side.

I simply apologized and did as he said.

He took me away from my friends.

He made sure it was just the two of us.

And then... he touched me in places I didn't want him to.

I was terrified - but this was a part of growing up, right, learning to do all these new, scary, adult things?

We went to our local Comic Con together.

I met an online friend there, and intended to spend the time there with both of them.

Again, he was infuriated, again, possessive, taking me aside for a very heated conversation, in which he yelled at me,

…He made me leave my friend.

He made me feel bad for wanting to spend time with anyone but him.

He forced me up against the window and touched me in ways that made my skin crawl in confused, tingling, terrified jolts, as if thousands of caterpillars were in a mad dash away from some unforeseeable disaster across my body.

It felt so, so wrong.

I realized that night that I couldn't love myself when I was with him, let alone even begin to feel the love and support of my friends - he wouldn’t let me see them.

It wasn’t much longer until, like a seamstress snipping off a broken thread, I did what my heart needed, and completely severed the ties between us.

And then, he was there.

My knight in shining armor, my fairytale prince...

If fairytale princes were nerds who love video games and puns.

His name is Dylan. At the time, he was 16, 7 months older than me, and a sophomore as well.

Only, Dylan isn't from my tiny, insignificant town - he isn't even from the same state as me

See, Dylan and I met online our freshman year, through a fandom we were both a part of.

…I had always liked him.
He was smart, cute, kind, and god, did he have a way with puns and awful, awful dad jokes - what more could a girl ask for?

So, imagine my utter shock when he confessed his love for me a month before we started our Sophomore year.

I took him up on the proposal of dating, and, we did for a bit, but…

I was scared of the whole stigma around long distance relationships, how they’re not “supposed to work out”.

I broke it off, but we remained on good terms; I’d made him promise, no matter what, to remain my friend - because he was, and is, my best friend - and I didn't ever want to feel the excruciating pain of losing him.

After I broke up with Bill, I started talking to Dylan more than ever.

Sure, while Bill and I were dating, I'd talked to him every day, told him everything that was going on in my life, including my relationship.

I had went to him first for advice on everything.

I had turned to him when I didn't feel like I had anyone else to turn to.

He was the only one who'd send me messages, wondering if I was alright…

And that's when it hit me.

Through everything, through every minefield of garbled up feelings, fear, and insecurity I'd walked through in my past relationship, he'd been there.

He had always been there.

And, I was still very, very much in love with him.

The night that all hit me, I cried so hard I swear I could have filled buckets up with salty tears.

Within days, I had asked if he was willing to take me back, despite the hell I'd put him through.

He didn't so much as hesitate to say yes.

Over the next few months, he pulled me out of the pit of despair I had been trapped in for so, so long, ever since middle school.

He helped me so much, reminded me who I was when I was younger,

And, when I almost failed English 10, he told me something that inspired me so much that I wrote an essay I’d put off for months because I simply didn’t have the motivation.

A year and 6 months after the love of my life scooped me back up and put me back on my feet, I took a ten hour train ride to go visit him.

I defied the odds, I did three things I never thought I could;

I left the state I’d never, ever left,

I earned the money to do so,

I met the man who had helped me realize how worthwhile life is.

And, I did all of it entirely on my own.

Frankly, because he loves me, I had the motivation to conquer every single 20 foot roadblock in my path.

I spent a month there, looking at my prospective colleges, the city, and making some of the best friends I’ve ever had.

I got to experience something I’ve always dreamed of - being in a place where I felt entirely accepted.

Not to say we didn’t have any issues - like I said, love really does has it’s ups and downs.

For example, his mom and I got off to a bit of a bad start.

He ended up getting grounded for a bit, which… wasn’t exactly pleasant.

But did we give up? No! We pushed on despite it, just like we had with every other obstacle we’d ever faced - and we did it together.

Leaving at the end of that month to go back to my tiny town sucked, sure.

However, I left knowing that I had found my true home.

So, because I love him, I put my best foot forward in my Senior year.

I did something I hadn’t done since middle school - I maintained a B average.

Because I love him, I applied to colleges out there.

And, maybe out of pure chance, maybe out of the lucky stardust of radiant, healthy, wonderful love - I was accepted into the University of my dreams - despite my lousy, 2.35 GPA.

Because we love each other, we treat each other as equals.

We’re still best friends, we tell each other everything.

Because we’re our own individuals, we don’t have to spend every second of every day with one another.

But since neither of us controls the other, we still want to spend as much of our time together.

Because we love each other, I’m not nearly as nervous as I could be moving 700 miles away from my family - in fact, I’m pretty excited.

Because we love each other, we understand the meaning of “mutual respect”.

Because we love each other, we support each other 120%.

And, most of all…

“Love” isn’t just some word we should throw around like a frisbee on our elementary school playground at any John, Dick, or Jane who lies through their teeth and only pretends to care for us.

Love is something to be coveted, appreciated.

And if you don’t feel that from the person who loves you, you need to think…

Are you with them “because they love you”?

Or, are you with them because they prove that statement to you,

In every single little amazing, adorable, caring, stupid dad joke thing they do?