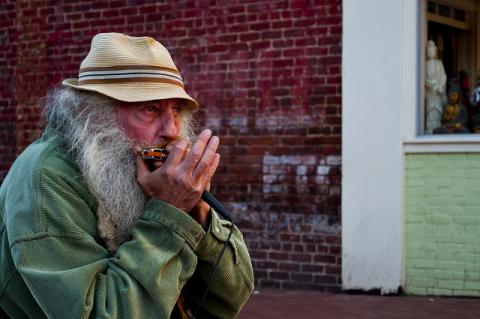 His Harmonica he played, sweet melody, music reached out to me like sun rays, penetrating my skin on a summer day, and I observed from a distance, not too far away, an old man with gray hairs, running down the sides of his face, an old coat he wore, worn by the time of his days, aged, the expression on his face, engraved, by the memories of his pain, the moments of rage, disdain, and a path not paved, but with pride his harmonica he played.

On the corner of main street, on a chilly day, in front of him a small box he laid, with the expectation that for his music, someone might pay, perhaps a dollar, a quarter, any kind of change, anything to quench his deep hunger if only for a day, and people walked by with the self comfort that he would be ok, that someone else would pay, or that he’d only use the money for some drugs later that day, but those negative perceptions did not make him go astray, his pride still remained, as I stood feet away, and his harmonica, he played..

So I looked again, then looked away, then in my pocket felt some change, and a dollar I had saved, and I thought, give this away? But what about bus money for the next day? And do I care what people say? If I give him the dollar won’t they judge me anyway? But it WOULD be a good deed to demonstrate, well maybe if I look away, I won’t have to see his lonely face, the bus should be coming soon, anyway…but the harmonica no longer played.

So I looked his way, only to see an empty space, where his box once laid, I looked around until I saw his face, and there he was, crossing the street towards his next destination of the day, and inside I felt ashamed, to my dismay, in my debate, he walked away, to a better place, where people pay, with no debate. And its innate, to help those in need, of hope and faith, but I stood in place, now farther away, from the man with the harmonica that so beautifully played, a song that no one new, except the soul behind that darkened face.

And so I too went on my way, feeling the burden of my shame, and his harmonica became, the purpose of what I write today, and even though that following day, I lost the dollar I should’ve gave, I know the man, now far away, still has his pride when his harmonica he plays.

Education system is the most important thing which needs a lot of improvements in our country. This system is the base of the rusheessay essay writing service education, and when it will be  flaw less, implementation of the educational policies will be easy to execute.