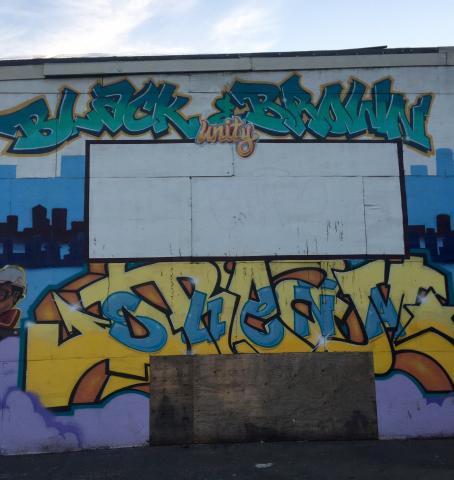 The hood also known as the ghetto, el barrio, the projects, section 8 and home.

A place where family functions don't end till the next day.

A place filled with liquor stores and memorials on the corner of each block.

The night before those cups were filled with sorrow and drank by blood brothers.

At night those memorials glow from the lights of religious candles and birthday balloons.

A place filled with hustlers.

Chicanos selling flowers, fruit and willing to clean your house.

The black folk who’ll fix your car and sell soul food out in the yard.

A place where the ending -ing turns into a.

Mama we gonna go to the park we finna be back.

A place where mamas vocabulary suddenly expands when it comes to scolding you.

A place where you only see your gang banging uncles on holidays.

Wearing a gold necklace with Jesus dangling in the middle because it might be just enough to keep you safe.

I've been to those fences and lit those candles.

I’ve yelled for the elote man to turn around and notice me waving my two dollar bills in the air.

I’ve pulled the car over to buy oranges and cherries on the sidewalk from a woman who’s been standing in the sun all day.

Hood is not having much family members because they are dead.

Hood is not being able to play in our own yard.

It is the way we were raised.

I've heard the sirens, gunshots and smelled the burnt rubber.

The gunshots just like the church bells , ringing loud and several of them

There goes another fence decorated with balloons and lights.

This is the hood we love, claim and will die for. The hood kills and hurts but that's the way the it loves you back.

Do not shout “ the struggle is real” “gang gang” if you did not live it like we did.

Your privilege raised you.

I am brown and proud to be.

Proud to be la hija de mi padre with his hands rough like the unpaved streets in my hood.

Ay yall Remember when the block was filled with so many of us during the Chicano movement and Black Panther party.

Remember just months ago when we all had signs and yelled for the lives of our immigrant parents through Oakland.

We have been oppressed for too long.

We are brave and beautiful.

With our golden skin, big hair, and loud voices no one will stop us.

We are not a minority.

Excellent! honest, gritty and powerful. This is beautifully written - you've described the hood to a "t." Check out some of my posts. I recommend you read Luis Rodríguez and Jimmy Santiago Baca, if you aren't already. Viva la Raza!