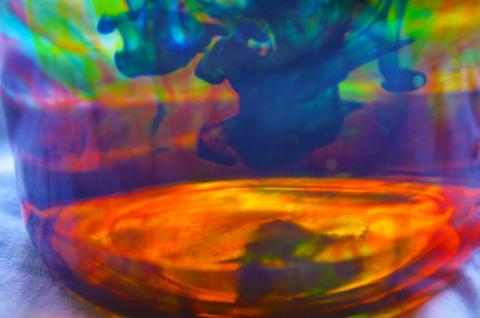 I sat upon a hill and looked out at the wide expanse before me,
Rich green grass covered the earth beneath me, and an honest
Blue sky stretched out endlessly
People walked, and ran, and laughed, and spoke, and sang
And a young man walked with an open jar.
He spoke into the jar some words from his mind,
And as I watched, before my eyes,
Shades of gray crept over the field, like a heavy fog,
Perverting every living thing.
Nothing left but cracked and barren ground.
Still I looked.
I saw men and women trudging like drones
With thick glass jars in their hands.
Each clutched heavily onto his jar, and tightly,
Like a man to his last meal.
I looked in wonder at this spectacle,
And turned to see
A jar sat there right beside me.
In fear, I whispered my own words into the glass
And as I did, such vivid colors seeped sleepily from my mouth
Quickly I tightened the cap, so not to lose
Those precious colors dripping south
And I became,
Precisely aware
Of the silence that so quietly had filled the air.
Sometimes silence can be so deafening.
The young man I had seen before
Now sat dreadfully still on the grass
His jar placed between his legs, he looked up.
So did I.
The sky, it seemed, had hardened.
It was a black, cold shape above us.
And every time you looked at it,
It whooshed down at a terrible speed.
So the more people looked to the sky,
The closer we came to our end.
And so, it came,
Nearer and nearer to myself, and the young man,
And everyone in the field that day.
How strange
I thought
As no one spoke.
I suppose
We must always look ahead or down,
And we’ll get by in this life.
So I picked up my jar.
The young man picked up his jar too, and began walking toward me.
Our eyes met, and it came,
A burst of colors more vivid than any man had ever seen,
More true than the bluest skies on the clearest day,
And then he looked away, in fear, perhaps, of what I might say.
And I stood there
As the wind from his stride broke upon my face.
Just look ahead, and we’ll be fine.