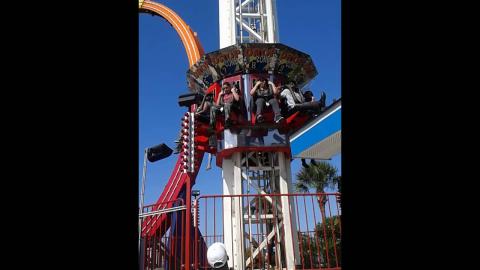 Heart caught, lodged within my throat

A hummingbird's heartbeat cannot compare to the violent cacophony within

The ride looms overhead, a monstrosity in rouge

Bodies descend before they can even scream

and their hair comes trailing behind them

It awaits, a terror foreboding, the sum of its metallic parts

As quickly as it started, it is over

The ride operator stands at the helm, guarded by the metallic monstrosity

A modern Charon, ferryman of Hades, unlike the world has ever seen

Why did such a machine strike fear in the primal parts unknown even to me?

Was it that its ups and downs lay in synchronicity with the chaos that was my life?

Was it that the terror sparked from this machine, represented in me the terror faced by my fellow black people struggling just to survive in this country?

Or was it just a fear of heights? So innate within myself, a fear of the dangerous, both in theory and in actuality, spurned by teachings of my collectivist immigrant people?

Whatever the cause and its complexities, I swore upon myself to face it

I walked up, noting how it was possible for my feet to feel weighed down with concrete, yet floating on clouds at the same time

I handed the conductor my day pass, a legal signifier marking me taking my fears into my own hands

Heartbeat like a monstrous drum solo, intended not to stop anytime soon

I sat upon the seat, a throne of reinforced plastic, a maw of death if ever there was one, and strapped myself in

My heart has relocated from my throat, and its beating now rung in my ears

My breathing becomes shallow and jagged and my blood runs cold, my body convinced it must be an icy winter day even in the midst of summer

More people board, victims of this behemoth, some arrive with trepidation, others with intrigue, and more with excitement

The conductor flips a switch and with a couple characteristic groans the being comes to life, and slowly begins its ascent

The ascent is lengthy and slow, a slimy suspense building up in the pits of my stomach, the ride’s greatest strength

A heavily populated web of little people, Lilliputians skittering around, stars amongst an interconnected galaxy, the rides below turn like gears and cogs, all parts of a colossal machine

The machine lumbers to a crawl, and eventually a stop

For a calm second it sits, serene in the atmosphere, high above worry and human error, and for a second, I am serene with it

Then, in the midst of a second, before my breath can be caught, the ride plummets

My organs come upon the strangest feeling, a feigned weightlessness, even if only for a few seconds

The ride comes to an abrupt stop, my breath catching up with me moments later

Within another moment the ride plummets once more, my heart left behind once again

Then finally the ride creaks to a stop, the world is once more balanced, gravity has taken its regularly scheduled position within my life once more

My seatbelt comes off, I flash the conductor a haphazard smile as I make my way down metal stairs, lighter than ever before

My organs sit not in the right place, but float, my heart included, all still stuck amongst the clouds

My spirit has lost its tether in the ether and I feel no urge to regain it.

My heart beats, but I know not whether it comes from the clouds or if it’s within my very chest

I notice a lightness to it, an absence of fear, like a sponge squeezed of all fluid

I take a breath, the airiness of my spirit shines through

The world must move on, and I am ready to move with it, and my fear, for once, shall not come along