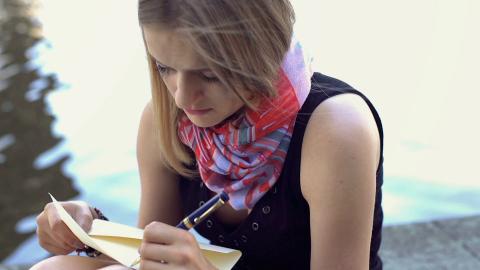 The name of the person who had used the computer before me,

Had been Hunter McDonald.

There I was in the computer lab,

Sitting in front of my assigned computer,

And your name was on the screen as the last person who had logged on.

Now, I can’t tell you exactly why your name stuck with me,

It was just a name to an unknown face,

But I remembered it.

I had exited the screen and signed myself in.

Your name was no longer there.

Was gone, replaced by me.

The next time somebody used the computer,

It would be my name they saw, not yours.

To any other person,

It would be like you were never there at all.

I remember that it was the last class of the day.

In a few minutes the bells would ring

And students would poor out of classrooms,

Smiling, laughing, rushing past in a hurry to get home.

I remember thinking that the minutes

Were ticking by so slowly,

And that the end of the day couldn’t come soon enough.

It would seem that I had something important planned,

But when school finally did end,

I just went home and did my normal afternoon routine

Of taking my life for granted.

The next day in gym class,

A girl was sobbing as her friends tried to console her.

Beside the array of whispered words

And soothing pats on the back,

I asked a friend of mine what had happened.

She said that the girl’s boyfriend had died the night before,

That he had went home and killed himself,

She said that his name had been Hunter McDonald.

I had never known that a heart could break

For someone you had never met,

But when I heard your name fall from her lips,

My heart fell with it.

It dropped to the pit of my stomach and shattered.

But then the gears in my head finally fell into place,

I had known that the girl’s boyfriend’s name was Hunter,

I had seen you all together,

And I had even seen you walk out of my last period class as I was going in,

But my mind had never noticed the connections

Between her Hunter and Hunter McDonald until just then.

Your death hit me really hard.

I hadn’t even known you, and yet, I went home and cried.

I cried because I felt that in my own little way,

I had known you.

I had sat in a chair that you had just gotten out of,

I had seen your name on that screen and had known

In some part of me that you were important enough to remember.

I cried because as I had sat there erasing your name from the screen,

You had been hours away from erasing yourself from existence,

And nobody had known.

I cried because you had felt that to die

Would be better than to live,

And no one should ever feel that way.

And to think that I had wished for time to go faster.

Maybe if I had known, I could have wished for time to stop.

I could have gone out of the lab and found you

And told you that you weren’t alone,

That you shouldn’t kill yourself,

That your girlfriend would be devastated,

And cry because she had seen your name and had known

You were worth remembering.

And not in the way of remembering someone who’s gone,

But rather, in the way that the next time she saw you,

She could recall who you were.

But I hadn’t known,

And there would not be a next time that I saw you.

When you only wanted it to stop.

You do not know who I am,

But I remember you.

Poetry Slam:
Life in a Letter Scholarship Slam — CLOSED
This poem is about:
Me

When I first saw that I didn't win I was disappointed...then I read your work and i can honestly say, you deserved it. Thank you so much for taking the time to write this. It was beautiful and chilling and left me speechless. GREAT JOB!

Wow.. I'm absolutely speechless. I'm so glad you won, and thank you for putting this story of your life out for others to read. :)

wow this is just amazing and heartbreaking at the same time. I've had a similar experience... Sophmore year one of my classmates took his own life and I barely knew him. And two years later I remember every moment of November 11th 2015.

I'm sorry to hear that. :(   It's been about 3 or 4 years since this day, and I still get upset every time I think of Hunter and what happened. It really is something I don't think you can ever fully get over, even when you didn't know the person very well (or at all). Nobody deserves to feel like taking their own life is the best option. :(

This is so beautiful. I got chills. You are incredibly talented <3

wow.. this is incredible