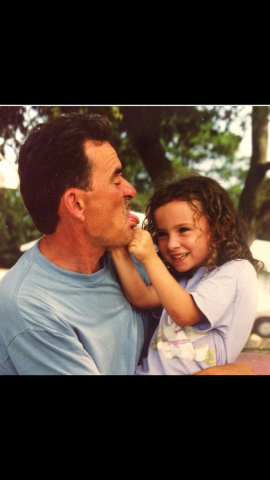 When I was 6 years old I lost something

It wasn’t just anything

Not something that can be replaced at a store

At just six years old I lost my father,

Those words to this day make me cringe

Make scream to god and ask him why

11 years ago my father lost the ability to live

It was almost like a time stamp on his forehead

Multiple Sclerosis is a death sentence

There’s no nice way of putting it

A sentence that can never be taken away

A life sentence for the diseased and their families

When I was first learned of the disease, I didn’t understand it

I was too young to grow up, but I did.

I had too, there was no option for me to stay within my fantasy world of childhood.

No option, my childhood was taken from me

Just like my father’s life was taken from him

Lost the ability to walk

To do the simple things none of us find hard

Being able to brush your teeth without help

The way I should have

That he was the one with the disease

He was the one, who was laughed at,

When he was nothing more than a human being

NOT BECAUSE WE DIDN’T CARE

But because we were

Living with the disease was painful

On all accounts, not just his

You think I liked waking up every day wondering how long my dad had left?

Liked thinking about the fact that I was going to lose him?

The only things I know about him when he was himself

Are stories that other people tell me

Stories I will never be a part of

Stories that feel as though they are never ending

Goes to dinner with them

Gets to go on road trips with them

Normal for me was having a dad who slept all day

Had to go the hospital at least 4 times a week

A dad with problems

But when I think about those problems

I begin to understand that I was lucky

Lucky to even have him alive

I never realized how much I would miss him

I guess because I thought my heart was bullet proof

Watching him, would make me be ready

Ready for the day he was gone

The day he would die

I never knew that, waking up every day would scare me

Find out I didn’t have a dad anymore

I will never forget that day as long as I live

My mom came into my room

She woke me up

She started to cry

I knew I didn’t have a dad anymore

I got up and screamed no

I cried as I told her I was going to school

She told me I wasn’t

I got dressed and said yes I was

Then she asked me if I wanted to see him

I nodded my head yes as I cried and hugged her

As I walked into the hospice room I cried

He was cold, and lifeless

At that moment I asked for a minute alone with him

And as they left I smiled and cried

Cured from this terrible disease that haunted him for 11 years

Even though I lost my dad, it didn’t matter because he was cured from the pain

The best word in the English dictionary

It was not the way I wanted to remember my dad

Everyday something happens that I wish I could tell him about

Every day I want to talk to him

I start to and then each time I hear his voice

Maybe one day I’ll be able to listen to them

WHY COULDN’T THEY HAVE CURED HIM TO LIVE NOT TO DIE?

Cured what messed up, jackass, spit in your face

I wish I could type, I should be able to. I had the ability and could have become an excellent typist. I am no longer able to use my hands, my disease has taken away so much. MS is starting to win on so many levels Tysabri is no longer holding my ms in check. I had such high hopes. But if I think about all that I have gone through these past 10 years things could be much worse. I can’t stand whining. Now it would seem it has become my way. Please let me go back to work. Let my brain and my body work in unison. I want it back. I wish I could get it back. Love is not the same anymore. Love is not the same. Want it back? I want it back? I can’t stand it anymore, I can’t stand it anymore. Can’t stand it anymore. Let it work together again. I wish it would work together again. Can it be as one again?

Poetry Slam:
Everything is Awesome Scholarship Slam - CLOSED
This poem is about:
Me
My family
Poetry Terms Demonstrated:
Imagery