6 Poems About Grief and Healing 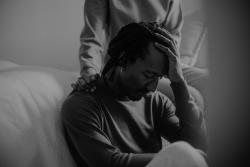 While poetry gives the space to celebrate feelings of joy or being in love, it also helps process pain. For this reason, poetry is often used as a great coping mechanism.

Many poems feature themes touching on universal experiences like life, death, and loss. One such theme is grief — a wretched pain that everyone experiences eventually. Grief can strike after loss, and loss comes in many forms: loss of a loved one, a beloved pet, a golden opportunity, a keepsake, or a thousand other things. Still we grieve.

Most commonly, grief poems are elegies. In other words, they reflect and lament someone’s death. Other poems about grief and healing will use images of death and loss or will express intense vulnerability to show the magnitude of their pain.

6 Poems About Grief and Healing

These six poets grieve across topic and time. They also show the various ways structure can be used in a poem of grief, reconciliation, and healing.

1. “The Night Where You No Longer Live” by Meghan O'Rourke

Megan O’Rourke wrote this poem full of questions after losing her mother. Though the poem is a body of questions, there are no question marks, indicating the writer has no expectation of receiving an answer. Instead, these questions are asked in limbo, asked into a void. O’Rourke faces the grief of losing her mother by wondering. By wondering, she inches toward healing, but she is stuck on “The Night Where You No Longer Live.” The last line reads, “Will you stay the night.”

2. “not an elegy for Mike Brown” by Danez Smith

In “not an elegy for Mike Brown,” Danez Smith elegizes all the Black boys and men killed by police. “I am sick of writing this poem/but bring the boy. his new name/his same old body. ordinary, black/dead thing,” Smith writes. He contemplates the Trojan War, sparked by the kidnapping of a woman, and the modern response when Black people are killed at the hands of police. He finishes the poem, turning to music as healing.

3. “Facing It” by Yusef Komunyakaa

Pained by his years fighting in the Vietnam War, Yusef Komunyakaa explores the aftermath of war in “Facing It.” The poem is set in Washington DC’s Vietnam Memorial. In the poem, Komunyakaa struggles between expressing and suppressing his emotions. “I said I wouldn’t, dammit: No tears. I’m stone. I’m flesh.” Then, eyeing down the 58,022 names, he finds and humanizes one name: Andrew Johnson. This fallen soldier ironically shares the name with the 17th president, a staunch racist. Komunyakaa, who is Black, weaves grief and healing in a most complex way. In 31 short lines, he grapples with war, massive death, racism, and love.

4. "Do not go gentle into that good night" by Dylan Thomas

5. “The Debt” by Paul Laurence Dunbar

Paul Laurence Dunbar writes “The Debt” in three quartrains with AA rhyme schemes. This poem is ambiguous, but the regret, grief, and guilt are clear. Dunbar writes, “This is the debt I pay/Just for one riotous day/Years of regret and grief/Sorrow without relief.” Though his specific grievance is unspecified, its weight is enormous. In this poem, Dunbar writes that he will only be free of this awful feeling in death where there will be “true release.”

Grief is experienced and handled in many ways. This poem is about finding hope and healing more than wallowing in grief. Still, the concept of hope cannot escape its entanglement with the issue of loss. In this poem, Dickinson reminds readers that hope is immutable. Each stanza highlights the endurance of hope through hardship and how almost effortlessly, hope springs eternal. In the context of grief, this poem is a reminder that to find a path forward, you must look within. Life goes on, hope remains, the birds will always sing.

Writing About Grief and Healing Yourself?

Are you grieving? Grieving a loss or a time in life you miss terribly? Find inspiration in the works above, then try to write your own poem about grief and healing. Think about how to express your pain and vulnerability. Think about the structure and literary devices. Think about the images that tell it best. Consider sharing yours here on PowerPoetry.org.

If you need additional emotional support, consider reaching out by calling a grief hotline or texting the Crisis Text Line.

From Grief To Art
I couldn’t see Nor did I want to believe Is this really the same man that I once knew? Every moment of my life I never did...

FUNERAL PLANNING
Death words in the Alphabet, Choose a brass, plastic, Bronze or wood Casket.   Flowers and a Grave Liner, Viewing and wake...

Hope killer
I saw you yesterday, A year ago today It's hard to explain Dreams can blend with memories that way It seems like forever...
END_OF_DOCUMENT_TOKEN_TO_BE_REPLACED