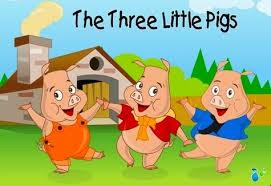 Once upon a time the three little pigs.

The three little pigs were old enough to go to college.

Now their mother had warned them to study, go to class and make new friends.

She warned them about exams that might come and they would fail class if they did not listen to her.

In his first semester in college.

He stayed at his dorm.

He studied a little and attended the classes that required attendance.

When the time finals came he failed about one class.

He loved learning so much and had goals set before he started his semester.

He made friends by joining organizations.

He also made study groups and was motivated to study each day for his class.

He attended class every day. He studied and made an average of As and Bs in his finals

He listened to what his mom had told him before he left to college.

The two other little pigs came to him for advice and he simple said, “ I listened to what my mom said to us before we came to college”. He also told them that it was not too late for them to start doing those things. They agreed that they did not listen. They then started doing what their mother had told them and were able to all three graduate from college.

Poetry Slam:
Once Upon a Poem Scholarship Slam - CLOSED
This poem is about:
My community
My country
Our world