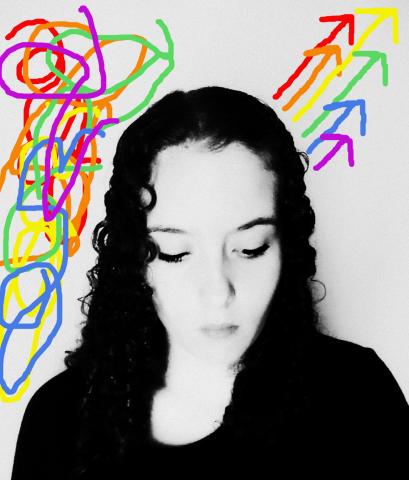 She with the lion's mane-

She with her head in the clouds

had always been one to suppress her thoughts

in hopes to just fade in the crowds.

As she grew, as she learned

the girl began to lose herself in her head

and the chaos inside suffocated her to silence

that didn't release until she was in bed.

When it all got a little too much

the girl opened up a document and began to write

until words were spilled on that page

instead of blood due to her fight.

Once she started, she couldn't stop

for everything that had been built inside during early years

making her vulnerable to show those tears.

there was a need forming inside

that pushed the girl to continue to write with stanzas

because this new sense of being free was like a joyride.

To this day, the girl hasn't looked back

she writes because she needs the release

she writes because it's the only thing she knows how

since her and the words just clicked in order for her to make peace.

She with the lion's mane-

She with her head in the clouds

had always been one to suppress her thoughts

but now lives her life through words in order to not fade into the crowds.

Poetry Slam:
You, Me, and Poetry Scholarship Slam - CLOSED
This poem is about:
Me
Poetry Terms Demonstrated:
Repetition