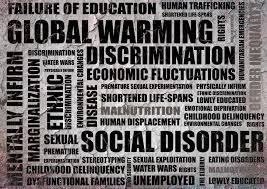 The world is truly made by the sum of all its parts.
To alter it one must go from the skin to the heart,
From the head to the toes,
In its blood and in its bones.
And if I were to change every bit of every thing
What kind of glory would my world then bring?
What if I could change the fate of the child killed in the womb--
Whether from one sickness or another
or a doctor and its mother?
What if no baby ever rested in a tomb?
And what if every child could know
About math history and science with no
Lawful exclusions inciting defiance
In every school one could ever go?
And what if not a soul were bereft
of adequate food and preferred dress
Of much of what's wanted more
and few of what's wanted less?
What if there were no reason for theft?
And what if every illness had a cure
And people were never forced to chose Between medicine and debt Or food and lives they could lose?
What if life was free forever more?
And what if no one needed a gun
And they were only used for sport and there were no murders to report
What if the death toll
read
none?
And what if people got along In every part of every place
With different customs from many a race? What if
anywhere
could I belong?
And what if no one was ever sold In exchange for money
drugs or gold what if no
one were ever misused, mistreated, distrusted, beaten or abused what if
there were never a need for armies, militaries or marines what if
No one need lock their doors Nor hide their jewels to keep property secured what if the
world
were
just,
That in due process I could trust?
What if no one were killed for a hoodie and iced tea or some
Jordans and an iPhone or a
Molly and some weed what if no
One had HIV
or A-I-D-S
or PTSD?
What if there were no need for police?
What if I could walk my city' streets in the dead of the night in the hot summer's heat with not near a crack pipe to be crushed at my feet
And what if little Sally wasn't kneeling
down the alley in a tinted Chevrolet
trying to earn a night's pay?
What if a good man could be buried without his
Family having to worry about the
"Pastor" trying to yell that he's
"Condemned the fag to hell"?
What if I could catch a plane to Zhangjiakou without taking off my shoes and being patted all around assured that no person was going to bomb or shoot me down?
What if it weren't dangerous to compete in the Olympics or the Boston marathon or to be in this part of town with this specific color on?
What if every person had a house that was their home?
What if every person were cordial at the least?
What if people loved themselves how they were born
Would that people needn't rest to be at peace!
The world is a thing I knew I'd change from the start
But, unfortunately, such efforts are the sums
of
all
its
parts.
Poetry Slam:
What Would You Change Scholarship Slam - CLOSED