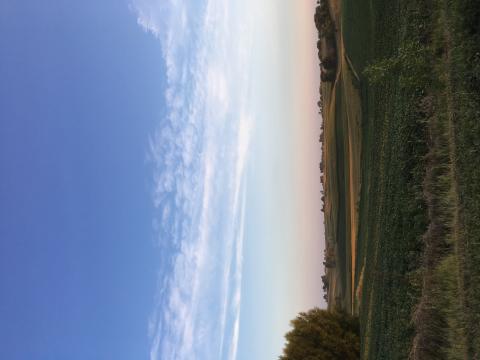 I am afraid of the dark and falling and those shadows you see in the corner of your eye.

And all of these fears probably stem from that time when I was young,

And I woke up one night shaking and afraid.

But for some reason it was like I had woken up and couldn’t remember where anything was.

Thinking back to my childhood home,

It’s a hazy memory of where each room is

Or how big it was.

So I stumbled around and ran my hands along the walls,

Which I wasn’t supposed to do because my hands

Were always dirty and the walls were supposed to be clean.

But I did it anyways because it was dark and all I could see were the frames of the doors.

I got to the stairs.

I can’t remember now where they were.

I remember after the fire, when I walked through the house,

I believe that’s where the stairs lived.

But later, the stairs were by the porch,

On the other side of the room.

But that’s not where they were that night.

I knocked on the stairs door.

I think I thought  was at my parents door.

Shaking and ready to curl up into bed with them

So I knocked a little louder,

Although it was still likely a light knock.

I was born premature and was told I would always be small.

I wasn’t very strong, or tall, or fast,

And when I was afraid or scared my anxiety poured from me,

Even when I was a kid.

I gently twisted the doorknob,

I probably whispered “mom?” or “dad?”

I remember doing that when I was older.

Slowly opening doors hoping my parents would be on the other side.

I was afraid for a very long time,

And sometimes still am,

That my parents will leave me behind.

They left each other,

And I watched as it tore them apart.

I was to fragile, to weak, to young to fix it.

What would stop them from abandoning me?

Leaving me calling out to the dark.

And as I leaned into the doorframe,

I took a cautious step forward,

Not wanting to wake them.

But instead of the soft white carpet being under my feet,

It was air, and I spun out of control down the stairs.

I always wanted to fly.

I never had the experience of climbing up a tree and jumping off,

Not because I’m afraid of heights,

I’m  afraid of the situation,

“It’s not the bullet that kills you,

The stairs split into two at the bottom.

Door number 1, on the left

Door number 2, on the right

I know this is right,

Because I was terrified of that room.

I called it “The Monster Room”

Although maybe that name came after.

I tumbled down the stairs and crashed through magical door number 2,

and sat up scared.

I would’ve kept my eyes closed,

But I had that silly childhood fear of the dark.

The fear that something was lurking and watching me.

Paranoia, is what the doctors call it.

I’ve got an overactive brain that likes to complete the picture before it's formed.

That’s why a shadows never just a shadow.

Why even when I know that if the lights turn on the goblin king is just a chair,

I still shake in fear before his throne.

And I was right.

In the monster room sat thousands of devilish creatures.

Crawled up from the pits of hell themselves,

I screamed louder than I thought possible.

I was always afraid of screaming.

Where I try so hard to shout or call for help,

But  I am incapable of doing so.

So when I screamed, I didn’t expect anyone to come.

But my mom and dad came. And they turned on the light

But I kept screaming.

Because the monsters were still there.

They were going to get me.

And I never went in the room again.

And to this day that childlike part of me is a little glad the monster room burned down.

Although sometimes I feel as if,

The monsters from even that day,

Are the very shadows lurking behind me.

Taunting me with my fears and anxieties.

Poetry Slam:
Annual Emerging Poets Slam 2017 — CLOSED
This poem is about:
Me
My family

Oh my gosh. I want to be able to say something amazing and encouraging to you, except I have no words as good as this poem was. Bravo!