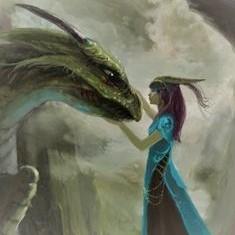 When knights in armor shined

There waited a young princess

Who had many hobbies and interests

Yet at the very thought of marriage, she felt herself grow distant

But as the story is supposed to go

She shall wait and wait until she’s old

Until a certain prince came

To save her and gain her hand and fame

“Why must I live by this tale?!” she exclaimed

The princess wanted to leave the tower

But societal roles told her she had no such power

And at night she would cry herself to sleep

“And for whom these words must I heed?”

To herself these questions she asked

“I am not ok, for my being has been masked”

Her time of waiting was dead in the past

The princess devised of a plan to leave

But with a dragon outside, this would be hard to achieve

She talked and talked it over with the creature

“We will no longer sit on the bleachers,” both concluded

“I will let you leave, go on, go on” said the beast

But the princess wouldn’t budge in the least

“Come with me, we can leave together!”

She added “friends are not always two birds of a feather!”

“We can change the world,” the princess now the bellwether

The dragon's heart was full as the girl built her up

And so she replied “you’re right, enough is enough”

The princess and the dragon left the awful place

And were the beginning of women of a new race

Who believed in smashing the patriarchy and leaving not a trace