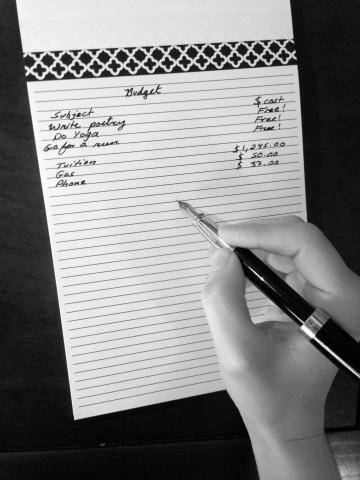 There is another world with a strange government

Hidden behind dollars and cents

That no one dares to look into

To see if it makes sense

It sings a song, declares a set of rules,

" You're poor, so you can't afford these;

You're poor, but there's a credit score that makes it cool

From the gods of credit, borrow to be blessed

It's always tomorrow, so you'll never lie in that bed

The bed you made with bills unpaid

Squished under the mattress

"You're poor, so you can't afford me

But you have to go to school, you see

Is it worth the debt, for one degree?

Swipe the card, to have it now

All that the payment will allow

Forgetting that in years to come

You'll pay for everything

More than it was worth,

The interest fattening in girth

Until the one textbook that you really did need

Was about a thousand dollars, but its price tag only read:

'One hundred and three'."

I've seen the world behind the money

And learned its clever rules

So tangled up in culture and need

Nobody knows what first to read,

So this is my not-so-secret secret;

Buy only what you can afford because

There's a difference between being simply poor

My path is not fun,

But your dollar will go far

You'll wear the same pair of jeans every day

And constanly check the apartment

To save electricity, turn off all the lights

But you'll sleep soundly at night.

Because, though your neighbors have gold on their ears

They constantly have credit fears

But you'll be free to live and smile,

What little you have is really yours

And you won't owe a dime.

There is another world with a strange government

Hidden behind dollars and cents

That no one dares to look into

But it makes a lot of sense:

A world where a college poet, Poor now,

Will be the future Rich.

Poetry Slam:
You Only Write Once Scholarship Slam - CLOSED
Guide that inspired this poem:
Writing a Poem About Something You Want to Accomplish