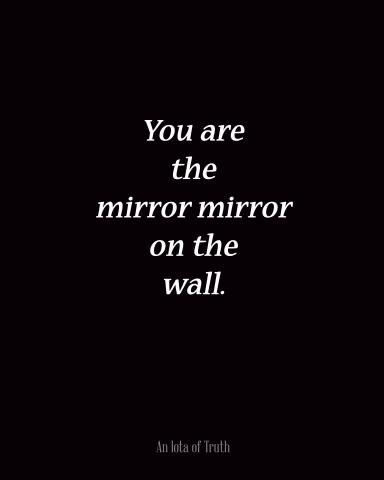 I look down to my hand in search for my triumphant sling
For weapon of choice had accomplished its dream
I move my head
I turn my eyes
I looked down at the thing that was supposed to be seen
Only to see that my arm wasn't seen
And the very thing that shattered was the man in the mirror
Ironically I guess, MJ says the message couldn't get any clearer

A prism of glass, a droplet of water, a piece of broken glass
All it takes is a reflection of light and things take the shape of a mirror
A single color, a simple beam of light, turns itself into a wide range of color
but now we have a tattered mirror that reflects Rays of light
Instead of an arch that antithesis’s night

It stands tall
Not a foot too high

Applying it to we instead of just dotting the i

Reflecting and detecting what stands in its sight
It knows how rainbows came to be
It knows what is right
However, most importantly of all
It doesn't know itself
It knows not of itself at all

A mirror itself, the glass, the frame
Is composed of a million tiny little things
More specifically the glass
The stuff that makes it gives it the look
Is composed of our vacation’s door
The beach itself, including the shore

There are 7 quintillion, five hundred quadrillion grains of sand on this earth
And out of all those beaches

A select few became you

But now the fire is heated, you are compressed, and suddenly, your glass is no longer a mess
So out of those 7 quintillion, you are just a dot, but now you have two ways of looking at this

I guess you preferred the top

I am unique
No one is me

So who cares about your beach, why care about yours

I have a beach house, so why worry about shores

And yes i have my own, but yours seemed grander

Until i looked at mine and realized yours was slander

I guess my Mirror was stronger than me, or maybe my mirror allowed me to be

So I thank my beach, my shore, my rainbow...thanks to you guys

That my grain of sand created a mirror...and that mirror is me

This poem is about:
My community
My country
Our world
Guide that inspired this poem:
5 Tips for Writing About Spirituality