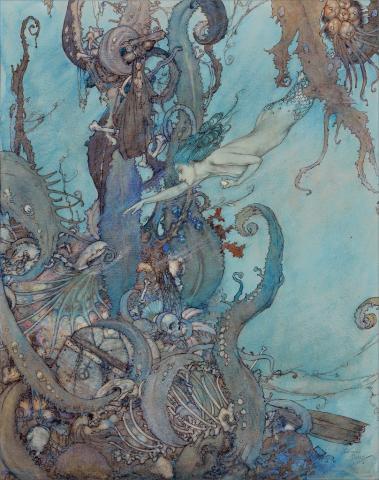 Everyone knows the story of The Little Mermaid right?

Young mermaid falls in love with a dashing prince at sea and marries him and they live happily ever after?

Ariel was not interested in Prince Eric at all,

Ariel was in love with Ursula the sea witch.

The Disney remake does Ursula no justice.

Ursula was not the villain of the story, she was a beautiful and kind young witch of the sea.

The real villain was Prince Eric.

Prince Eric had been on sea for a long voyage and spotted a beautiful mermaid happily swimming near his ship.

Prince Eric had connections in the sea and ordered one of his informants in Atlantis to keep an eye on the redheaded mermaid who was named Ariel.

Ariel snuck away from her father’s palace every weekend to see Ursula the sea witch.

Ursula was around Ariel’s age and everyone feared her but Ariel.

Ursula was very self-conscious about her octopus appendages but Ariel thought they were unique and beautiful.

“Why do you want to leave your father’s protection?” Ursula asked curiously as she mixed a concoction that would help with healing wounds.

“He’s so controlling. I think he is starting to catch on that I’m not going to underwater yoga lessons every weekend. And on top of that, I think father has sent someone to follow me around. I had to lose the guy’s trail before coming today!” Ariel stated clearly full of annoyance.

Ursula swam next to Ariel and put her arms around Ariel’s shoulders assuringly, “Hey, it’s going to be okay. I’ll tell one of my eel assistants to escort you home and here, they’ll figure out who the rat is.”

Ariel nodded and kissed Ursula on the cheek. Ursula blushed but did not pull away from the innocent peck.

Little did they know that the informant had found where Ursula lived and witnessed the kiss. The informant fled the scene and reported to Prince Eric immediately.

Prince Eric was disgusted, “She is in love with the sea witch?! That is disgusting, and completely unnatural.”

Prince Eric’s informant mumbled, “So is a human lusting for a mermaid..” but Prince Eric did not hear him.

Prince Eric paced back and forth trying to plan his next move. Prince Eric decided his informant should go to King Triton himself and inform the King that Ariel plans to elope with Ursula.

The informant slide away into the dark night and said, “As you wish, my Prince.”

Upon discovering Ariel’s plans to leave Atlantis, King Triton was furious and yelled at the top of his lungs, “Where is my daughter?! Ariel, come to the main hall at once!”

Ariel was taking a nap outside but heard the sound of her father’s angry voice, obviously directed towards her. Flounder nudged her and said, “We need to get out of here Ariel, I think your dad found out that you want to elope with Ursula and he’s going to make sure you never leave the castle again if he catches you!”

“Oh no!” Ariel said and started swimming furiously away from the palace grounds. The guards attempted to follow her but Flounder distracted them with the help of some other sea friends. Ariel swam as fast as she could to reach Ursula’s cave on the outskirts of Atlantis.

“Ursula!” Ariel shouted as the approached the cave.

The cave was silent, and the magical orbs that normally kept the cave lit were dark.

“Ursula?” Ariel whispered into the darkness.

Ariel lit one of the orbs and held it in her hands like a lantern.

She shone it above her head and saw Ursula lying on the floor, bleeding dark red into the water.

“Ursula!” Ariel shouted and swam next to her beloved.

Ariel applied pressure with some nearby cloth onto the wound and asked, “Who did this to you? I’m going to find them and make them pay!”

Ursula shook her head and said, “You need to leave. Atlantis isn’t safe for you anymore. Prince Eric, the human Prince who lives along the shores, he lusts for you. He knows you want to elope with me, that’s why he… he sent someone to come kill me. And then he will take you to live amongst the humans.”

“No! I would never do that!” Ariel’s eyes started tearing up and she continued, “I won’t leave you… I don’t want to be alone.”

Ursula smiled weakly up at Ariel and held Ariel’s hand against her bosom, “It’s okay. I’m glad you’re here with me. At least now I can tell you, I love you.”

Ariel’s tears flowed continuously down her cheeks and she gritted her teeth in anger, “I love you too! I’ve always loved you since I first saw you. I knew you were not what everyone said, I knew you were special and kind.”

Ursula passed away smiling in Ariel’s arms and she dissipated into the water as tiny bright blue sparkles.

Ariel shouted, “No! Curse you father and Prince Eric! I will have my revenge!”

She left far beyond the reaches of Atlantis and the King’s guards.

She left and planned to never return until she was ready to exact her revenge.