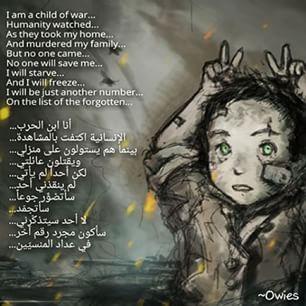 This one is dedicated to those countries.

To those who’s going through all that suffering.

To those who witnessed all those murdering.

The martyrs and killings.

Those shootings and shamings.

It’s to all those innocent children who can’t sleep at night.

I mean what if that was your kindred?

To those who run from the fight.

To all those who starve with no provision.

I mean, how can a human being even raise arms against their own?

I mean, how can you kill a child’s mother before them.

How can you rape a child’s sister before him?

Do you not see your injustice?

How can you be so merciless?

Do you feel no pity?

Out there bombing those cities.

Shooting down those villages.

Amd harming those places of worship?

Do you not see these flags of beliefs you’re raising aren’t really true if you’re going against them?

Or the affliction you caused upon those people who did nothing to you.

I mean, you’re taking another life. Does that mean something to you?

It’s saddening how such forces call themselves heroes don’t come to their rescue.

It’s maddening how they hide behind their ammunition and guns.

It’s sickening how they throw their bombs.

sadly it’s askew.And when they return to base they leave it as a job, well done.

All those aircraft sending down your drones. I’ve come to realize you're all just clones that follow in the footsteps of oppressors like Hitler naming him your successors.

Do you have no heart or soul.

Look at the path you chose.

is within my reach.

Cause today I’m a palestinian, a paki, libyan, yemeni, burmese, and egyptian. If no one else will take a stand then I will. I will raise my hand and tell you to stop!

To stop hiding behind your guns and government.

To stop you from, killing anymore millions.

To make you realized that God is watching.

And you will be demolished.

Justice will be served.

Voices will be heard.

Sobbs will no longer remain.

Love and laughter will be attained.

This one is dedicated to those countries.