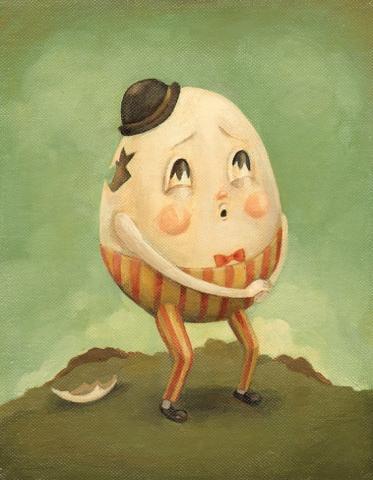 Composed with envy atop his brick wall

A gust of wind coursing through his veins

Humpty Dumpty sat and pondered, with tears in his eyes

as he studied his broken remains

where eggs were thriving in food

have found a new way to be rude

It all started with butter

that technically wasn’t so, an imposter among dairy alike

And then it was the dragon fruit, with skin so red

which I was surprised to see had no spikes

Lastly, the best “miracle” food all throughout the land

a fruit that pleasured humans from head to toe

The overused, oversold, all too hyped fruit

Breakfast was never the same, with this confusing edible

a riddle that angered Humpty Dumpty so

As he saw avocado approaching, who smiled and waved

but simply reminded Humpty of his woe

Once avocado disappeared from his line of vision

A single, blue tear was shed

He kicked his right leg from out under himself

and lost balance due to his enormous head

“Why me?”, Humpty screamed as he pled to the sky

Big and blue, like the tears on his face

Rushed to Humpty’s aid with haste

“Dear friend, do me justice and climb down from that wall!”

The king yelled at the solemn man

Humpty considered, and much to his horror

Took it lightly, with a grain of sand

“Why should I, your highness, bow down to your needs,

When you’ve never tried stopping me before?”

“Every day of my life, my heart filled with strife,

I sit atop this wall no matter how sore.”

“My heart is broken, my mind slightly scrambled,

As I sit in the sun and roast.”

“But my mind, far from easy, will never understand,

The concept of avocado on toast!”

Poetry Slam:
Once Upon a Poem Scholarship Slam - CLOSED
This poem is about:
Our world
Poetry Terms Demonstrated:
Couplet