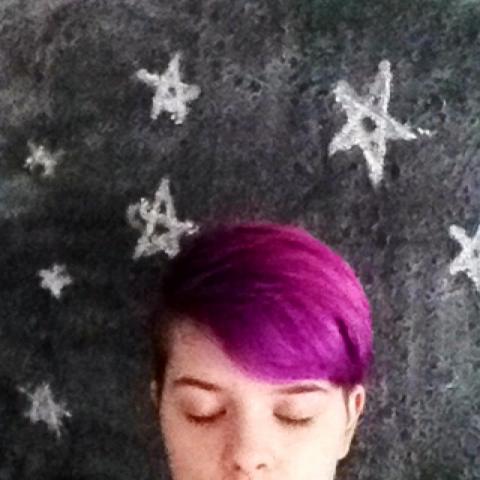 when my pastor first told me all the good kids go to heaven
for eternity, it was enough to make little seven-year-old me
take a serious look at atheism.

it’s not that i’m skeptical of paradise and it’s not
that i’m against what jesus stood for. it’s like —
i tried to imagine eternity and it felt like cramming elephants
into my skull, like my eyes were gonna pop out and roll away across those
polished shoe-scuffed hardwood floors.

infinity scared the shit out of me and it still kind of does.
boundless is horrifying; endless is just too goddamn much. i can’t group infinity
into neat little clusters of three or five and i can’t fit
its scientific notation into my pocket and i’m only human,
what do you expect of me? i’m terrified of that which
i’ll never understand.

i used to think outer space was a box —
that one day someone would announce
the astronauts had reached the end of the universe,
white gloves stark and useless against black, finite
walls.

i was fourteen when i saw the first glimmer inside me,
cut my hair pixie-short after anne hathaway in a magazine and
looked in the mirror, touched my fringe and learned
the true curve of a smile.

(tell the world — this is going to change history.)

whole goddamn universes sparkling where i hadn’t seen them before,
bathtubs overflowing with stardust, basins of darkness
to catch the light — so much of it everywhere, in sudden illumination —
so many stars, too many to count.

infinity still scares the shit out of me, okay.
you’ll never find me volunteering for a day trip to mars
and i’m not going to be one of those mathematicians
who spends their life trying to wrestle a sideways eight
into submission. but i can coexist with it.
i’ve got fucking eternity inside of me,
a neverend of boundless and bounteous space,
jumbled with stars, pockmarked with planets,
so much to wonder at and so much to respect —
and i love that, jesus.
i really do.

i found heaven the day i let myself realize
i’ve got black holes, yeah —
but shit, man, i’ve got stars.