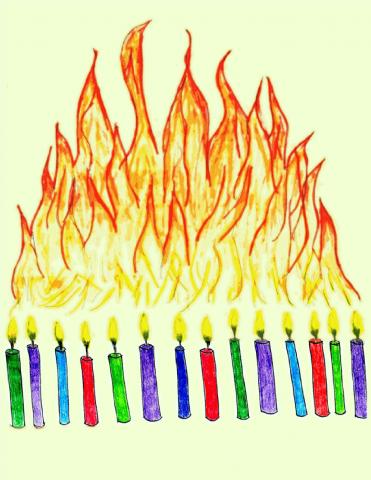 as the thin, grey whispers fill the room,

the layers within the mask deepen

between reality and illusion

And when the Egyptians and Chinese built

their pyramids and walls, they knew

no one lugged around stones and bricks

knew no one ever built a barrier

The longer the fire blazes,

the more incentive the world provides;

incentive to build a barrier around reality

to sink into yourself

It starts off slow—but even a forest fire

starts with a flame

You’re six and your best friend,

the one that used to dream

about matching weddings and houses

decides to ignore you

in the bus, in class, during recess, for the entire year

So, dab on some lotion(SPF 30), a protective layer

to ensure that you stop

to her anymore. When she speaks to you again

the last two years feel like a nightmare, just an illusion

but apply some chapstick

to start healing those cracks

halfway across the world

So, start getting into the habit of applying

a layer of nail polish to both your hands

purely in an effort to stop

biting your nails because you refuse

Twelve: the obsession with popularity begins

do whatever it takes to make them like you

to nothing flavored pink sparkly

Fourteen when watching the stars

of things you stopped believing in

But you still blow out all fourteen candles

all the while thinking,

Fourteen when you figure out

how to apply concealer

Sixteen and life’s transitioned to an amusement park

filled with so many ups and downs

that it’s nearly impossible to keep track of it all

So, start straightening those curls

to assert control over some

the weight of the mask adds up

layer upon layer plastered to your face

Eighteen when the realization hits:

all that’s needed to remove the burden

just the courage to stay

when the clap of thunder rings

to look up into the rain

to face the chaos of reality

free yourself from the