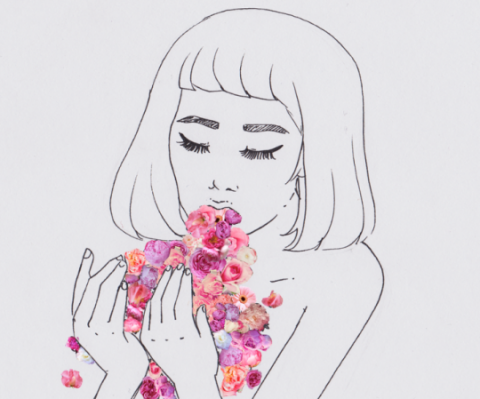 I mold shapes into

with that intimate touch

of the soul kneading words.

I began with bulky building blocks

under the guidence of a sixth grade teacher.

I had been raised under a suburban safety shawl,

but I learned that poetry is more than "Fill in the Blank" haikus.

with thick smoke meant to agitate the eyes.

So I wiggled my fingers and sparked messy, bold poems.

I stuck out my tounge and could nearly taste

that were echoing through the smoke.

Six months later and all traces of juicy, ripe potential had left my tongue,

despite my fire fingers' constant conjouring

It's not that the whispers stopped,

they grew louder into

of a new vocabulary.

This new vocabulary was pleanty expansive

but my brain detected every underlying tone of failure.

So as a fire consumes trees, my words consumed paper in a glittering blaze.

I isolated myself in the remaining clouds of smoke,

I had to write furiously to maintain my veil of smoke,

and in doing so I found not only solace, but understanding.

I could mold poetry into the scratchy wool

that suffocated my brain,

bulged behind my eyes,

It allowed me to slice open my belly

and pull out the moldy stuffing.

I could sculpt words into daggers as sharp as the food

I forced back up my throat.

I wove words into a thick padding

to protect my insides from barbed wire skin.

As the metal thorns began to melt and my insides began to heal,

I began writing myself stepping stones of stars,

a little sliver of the galaxy

oozing into a thin trail to show me the way.

And now, though I can not decipher the precise formula that would stabilize

my ever-shifting lines and boundaries of my body and relationships,

I have stacked word on top of word,

building myself a pole that stretches into the heavens,

one which I am clinging onto for dear life.

I am still bold and messy with Forest Fire Passion,

but now I dare to be stable and strong,

with poetry being the neck that keeps my head held high.

Poetry Slam:
You, Me, and Poetry Scholarship Slam - CLOSED
This poem is about:
Me
Poetry Terms Demonstrated:
Metaphor