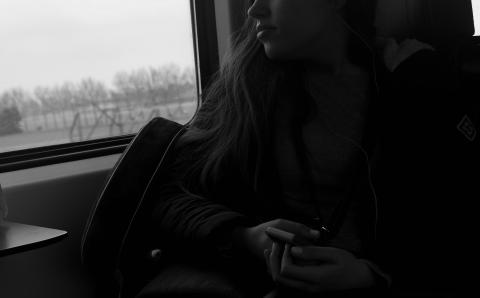 Put it back down.

Swirl it around like the endless thoughts that consume your mind,

Preventing you from doing just that. Consuming.

But whatever you do, don’t swallow.

Pretend that drinking water will fill up the void that’s feasting on your fears.

The void that’s getting bigger, as you get smaller.

Pretend that the thoughts going on in your head can fill the emptiness inside.

Pretend that the screams in your mind, filling the gaps where knowledge should be,

Don’t taste it and don’t smell it, or you’ll remember what it’s like to be satisfied.

Don’t listen to people telling you to eat because the voices in your head are loud enough already.

If you don’t think about what you’re missing, you don’t need it. Right?

There’s the want to conform and distort your body into an unreachable ideal,

There’s the need to feel better,

Except now you know that you need it.

Now you know that there’s no reason to fear the things that you need to stay alive.

That what you see in the mirror doesn’t reflect your reality and that your reality shouldn’t be scared of becoming a stronger version of itself.

A version that is self-nurtured and not scared of replacing the screams with words of affirmation.

Now you know that a love for the things that you keep you alive doesn’t mean you’re diminishing your self worth.

Because the only thing doing that was the fear of the mirror’s reflections and the idea that one day you could love to eat again.

Now you are mesmerized by the outline of your hips and the amazing ways that your body can move.

Now you know that life is more than a series of numbers on a scale,

or distorted pictures of a sad reality morphed by societal expectations.

Now you know how to lock away and burn all the thoughts that once ignited your dismay.

This poem is about:
Me
Our world