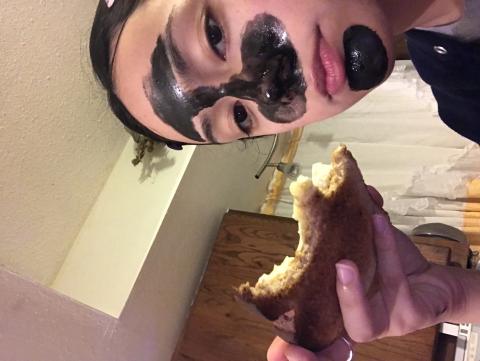 When I was fourteen, I pressed my hand against

A stranger’s chest and learned that a heart

Has four chambers and cannot feel

And I hmmed with the satisfied ease of someone

Hearing in words what they’ve already known in feeling

Because in my heart there is no room to love,

Or fear, or hurt, or rejoice in the world around me -

Only room to tha-thud in a dulcet beat and pump

A river of that rich elixir through my veins

To keep my limbs supple and my mind willing

For all the passions that may consume me.

And I laughed gleefully, not at all surprised

Because where would my life rest if not on my hips?

Where would my worries and fears sink to,

My dead hopes and forgotten dreams fall to,

My thoughts and beliefs and intentions stem from

If not from the fleshy nook where I can balance children,

The soft curve of my body that sways to nostalgic 50s,

The rotated bones that twinge when everything gets too heavy?

And sometimes they get stiff and keep me awake until

The sun peeks over the illusioned horizon I will never touch

But they get stronger and, one day, they will hold the whole world.

When I was thirteen I caught bronchitis and learned

That the lungs were powerful things and hacked my way

Through four consecutive days and nights

And knew there was no room for the breath my body craved,

Because while my unwavering heart was too busy

Circulating life throughout my body to cradle anything but

An electrical impulse, my ribs gave shelter to

Everything I held dear, understanding that some things

Were simply more important than breathing,

So I gasped for air and felt Love press against my bones;

Felt everything I live for rattle against my bruised and aching ribs,

Right there, snug against my throbbing thoracic

So they could feel the pulse that beat for them.

When I was nine I squinted my eyes and learned that

To see the world was not to see blurred edges and indistinct figures,

But to see through a pair of flimsy brown frames

That balanced precariously on the bridge of my nose

And hid my face until it became less familiar than

The reflected lights that flashed off the glass between

Me and everyone else, and I became a stranger

And my wide eyes became afraid of exposure

And my ears got used to the weight of an unblemished view,

And my face, my identity, became defined by the fashion

That trampled the freckles on my cheek and the mole

A little ways off from the center of my nose, and my name

Became synonymous with the girl with the big glasses

And showed me face value does not necessarily come

From the face, but from the eyes and the mind that exist behind it

Lost somewhere between my intestines, a place where uneasiness

Was dug into me when I was too young to distinguish

A twisted kind of indigestion, only more lethal because of a truth

I haven’t been able to admit to myself, a truth that was thrown back

At my face when I tried to give it to someone else,

So it sits in my gut like a shattered universe and on bad nights,

That can be soothed only by forcing my bones to become hollow,

My hips to go numb; by turning my ribs into a safe haven

And my mind into a barren landscape so that the image

Of the glinting bathroom floors and the echoed whispers from

Was a tricky thing to be, because everything we are exists

In the complicated and not entirely known habits of the brain

And mine was sad and alone and lacking in good truths

And it turned my hands against myself  and made thought

Into a noose, but it gave me the strength to whisper nice things

To an empty room so that I could pretend that they were real.

Black man unsure of where the night has gone

Like a band around his coward arm; and my brain does not

Like touch, and does not know how to love and sometimes

My drowning soul to the surface for the air I would give away, so I sink -

Ocean breeze slips into my lungs, careful and light enough

Makes my heart pulse like worlds could exist inside of me

And I learn that being alive is kind of a wonderful thing to be.

Poetry Slam:
Learn Between the Lines Scholarship Slam — CLOSED
This poem is about:
Me
My family
My community
Poetry Terms Demonstrated:
Imagery