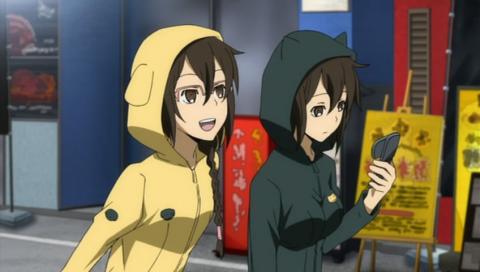 My name is Alyssa and fourteen years ago in March something complicated happened that changed my life forever. When I was still a baby my parents got divorced; around my fourth birthday (March 1st, 1996) my father Rob introduced me to a woman named Amy. She had divorced her husband Chris for my dad. Amy then introduced me to her daughter a couple weeks after I turned four years old. Her name is Mara and she is three months younger than me, we hit it off right away and in an instant I made a best friend for life This is our story about our lives together so far as soul sisters.

Our families said we looked like fraternal twins, the only differences between Mara and I was that my hair was dark brown, I’m taller, fair skinned, and I have blue eyes. Whereas Mara has dirty blonde hair, brown eyes, is slightly shorter, and has tan skin. Mara and I were so happy we were going to be stepsisters. My dad and Amy lived in a nice little house and Mara visited every two weeks when she wasn’t with her dad. Due to the fact we only got to see each other on weekends we always enjoyed our time together. One Friday night back when Mara and I had bunk beds she asked me to sleep on the top bunk, which was mine. So I decided to be nice and let her but warned her to be careful not to hit her head on the ceiling when she woke up. My dad came in with Amy to tuck us in and he would tell us that there were black shadow snakes on the floor to keep us from getting out of bed until dawn. The next morning my dad yelled “Girls wake up we made chocolate chip pancakes!” Mara woke with a start and hit her head. Crying she refused to eat the pancakes and instead had a bowl of Trix cereal (Mara hates breakfast food to this day). After breakfast we made a fortress in the living room out of pillows and sheets, and then watched Saturday morning cartoons. Sometimes we’d sleepover my othergrammy’s house and my dad’s sister (Aunt Kelly) Kelly would play with Mara and I as we took our nightly bubble bath together. Then othergrammy would wrap us in a huge towel so we could sit in front of the fireplace and dry off. Around the time we turned six years old my dad and Amy broke up. Mara and I were horrified we would never see each other again. That’s when something completely strange and unexpected happened. My aunt Kelly started dating Mara’s dad Chris; we were so happy we could still be together. Mara and I super secret sister swore we’d always be sisters and nothing would ever tear us apart.

The thing about being sisters is there were always fights, arguments, and competitions. A fight for the record books happened one night at my great grammy’s house when we were about eight years old. It was very late at night and we were watching the My Life as a Teenage Robot movie. My great gram came in and told us to shut off the tv and get some sleep. Mara and I are very similar but we’re also opposite sides of the same coin. I turned off the tv and Mara turned it back on. This continued for about five minutes before escalating into wrestle mania. We were beating each other up, rolling around on the play room floor until great gram came in and yelled at us. After about ten minutes of silence we apologized and made up (if only it was still that easy). Around this time my dad married my step mom Jen who I love very much. Some weekends Mara and I would stay at dad and Jen’s house, those weekends were always fun. I taught Mara how to play videogames, got her into anime, we’d have movie marathons, and play on my rope swing after rolling down the hill. We love the same kinds of books so sometimes we’d just sit in my room burning incense as we read for hours.

Our lives continued like this for a few more years until another exciting event happened in 2007, Uncle Chris proposed to Aunt Kelly. So now Mara and I were going to be cousins, though we consider ourselves sisters first. Aunt Kelly and Uncle Chris’ wedding was in the spring time. Mara and I were to be bridesmaids and it was held at Skytop Lodge in the Poconos. Mara and I think the wedding should have been made into a movie due to all the crazy antics that ensued over our stay at the lodge. Mara got hairspray in her eyes while trying to fix my hair, we jumped off a small waterfall, playing ping pong with a Chinese champion and getting the ball stuck in my cleavage, and last but not least I had all the children from the wedding party chasing me throughout the hotel for five hours while I was in high heels and a dress. They were trying to set me on a date with Mara’s blood related cousin. This led to me tripping on multiple occasions, a narrow elevator escape, and finally out maneuvering them to the safety of my room. My asthma was acting up so bad it took me a long time just to catch my breath, needless to say it was the best exercise I’ve ever had in my life. Once the wedding was over Mara and I became even closer because we are officially family now.

Our crazy life together has continues since from shooting targets in the mountains for hours, riding atvs, seeing each other every new years eve and staying up all night, twenty minute impromptu sleepovers, matching voicemails, loads of inside jokes, and so much more. Like how Mara has two baby sisters and I have two baby brothers. We both crossed our fingers and chanted and it worked. I wanted brothers and she wanted sisters; it was really ironic because our parents wanted the opposite genders but we got what we wanted. Not to mention they all have the same age differences except Mara’s little sisters are all three months older than my baby brothers which is the opposite of Mara and I. Lorelei and Christopher are both two years old; while Hayley and Riley are both under a year.

We are like yin and yang, the opposite sides of the same coin. Mara and I believe that we’re soul sisters and throughout the ages have found our way into each other’s lives, whether being born actual sisters or becoming best friends. Together we are complete because Mara and I make up for what the other lacks. Over these past fourteen years we have created an unbreakable bond. Without Mara I wouldn’t be the person I am today, she changed my life for the better and I wouldn’t want to live it without her.