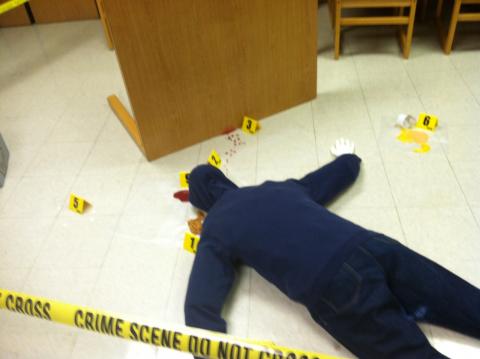 An outbreak of an illness may cause several people harm to

those who surround the infected. The case

began with students on a campus who visited the informatory

at the same time, as these students suspected

of the Flu and meningitis, it is only proven with their DNA.

It begins with investigating every student and

brainstorming a diagnosis, but to clearly identify the pathogen a

sample of DNA is required. The DNA is

gathered in small segments so the computer can compare other

16s r DNA with the PCR. The important role

was due to the BLAST that identified which pathogen was causing

the outbreak. After the identification of Neisseria

Meningitis in Sue, students was under the ELSA test that showed if

Spinal Fluid. Other students who did not have Bacterial Meningitis had

their DNA identified under BLAST to determine

other diseases like Influenza B Virus, Mononucleosis, and Strep Throat.

To begin the investigation, Guen was first to report her symptoms adding

majoring in Biology. Both students play on the University Soccer Team.

She reports a headache and a slight fever, but then

of 100.6 degrees Fahrenheit. However, in her next visit,

she reports neck pain in the mornings, so the next action is to collect her

affecting her, which suggested Neisseria Meningitis. To prove it, an ELISA

test was conducted by gathering CSF. Once shown positive, a course of

action to treat her was by prescribing antibiotics.

Then Lucy, Guen’s roommate, felt run down and when she stretches her

body it still feels sore. She does stay hydrated and does not drink caffeine.

She did agree to have her CSF and blood collected, as Sue’s roommate, it is

possible to have Meningitis also. The ELISA test was conducted to then

prove positive for Neisseria Meningitis. Like Guen, her treatment was a

Randy a reporter for the campus newspaper, listed him having a dry

cough, more tired than normal, muscles ache, and his sinuses acting up.

His temperature was 100 degrees Fahrenheit. An ELISA test was run to

see if he has Meningitis, but his test was negative. So the BLAST i

dentified is illness as Influenza B Virus.

Furthermore, Mary, who is in the same sorority as Lucy,

has swollen glands and wakes up with a sore throat.

Ray, her boyfriend, also claims to have the same symptoms.

The BLAST test was conducted to then show that she has Mononucleosis.

To treat her symptoms, it is recommended to rest.

Rachel went to the infirmary with symptoms of her throat being itchy.

To relieve the irritation, she drank tea.

She has not been able to regulate her temperature and she felt heavy.

With the ELISA, it results was negative.

So, with the BLAST, it identified the antigen as Strep Throat.

To treat Strep Throat, she was prescribed antibiotics.

The Next checkup was for Sarah, who is a close friend of Guen and Lucy,

ate their food and drank from their cups.

and chose to go until her symptoms worsened.

She could not get out of bed and had a fever of 103 degrees Fahrenheit.

With her contact with Guen and Lucy, it was suspected of her to also have Meningitis.

To be sure, the ELIZA was conducted to then prove positive for Neisseria Meningitis. Like Sue and Jill, she was prescribed Antibiotics.

Larry is a student who photographs school events and has contact with Randy.

He has symptoms of a runny nose and cough

and tried to take vitamins to prevent further infection.

He has a temperature of 100.5 degrees Fahrenheit and was tested for meningitis.

With Negative results, a BLAST was run to then show he has the Influenza B virus.

Just like Randy, he is prescribed plenty of rest and cold medication.

Next, Oscar, Guen's lab partner in biology, who are good friends.

He has symptoms of extreme fatigue and headache.

Because of his contact with Guen, he is tested with ELIZA

which then shows positive for Neisseria Meningitis.

Like the other patients with Meningitis, he is prescribed antibiotics.

Lastly, Arnold, Oscar’s neighbor, has symptoms of a headache and sore throat.

He is tested with ELIZA to then show negative results for meningitis.

He did not want any further test to be done, and a full report on Arnold is incomplete.

Through the symptoms, it was hypothesized either the flu or meningitis on

most patients. So, with Guen to be the first patient,

it was proven that Neisseria Meningitis lurked in some of the patients.

Between each patient, a connection was formed that showed how each infection spread.

This was due to the fact that Guen and Lucy lived together,

Rachel would visit them all the time and eat the germs spread in the room,

and Larry who is friends with Rachel,

this showed the connection of them all to have meningitis from close contact.

The concentration of Meningitis was highest with Guen

suggesting that she started the illness.

Leaving Larry as the last to be infected from the bunch.

Between Arnold and Oscar, who had Influenza B Virus,

Wanda was the only one diagnosed with Mononucleosis.

Whom may have had contact with Arnie and her boyfriend Ray

which may also have it.

Meningitis is not very easily spread;

however, to prevent any further spread it is best to get antibiotics,

wash hands regularly, do not do mouth to mouth contact, and vaccinate.

and Rifampin (Rifadin). For the Influenza B Virus,

it is recommended to wash hands, do not touch face,

and make sure to get the yearly Flu shot.

Also for Mononucleosis it is recommended

Poetry Slam:
Once Upon a Poem Scholarship Slam - CLOSED
This poem is about:
Me
My family
My community
My country
Our world
Guide that inspired this poem:
Write a poem about of your favorite character from a book.
Poetry Terms Demonstrated:
Metaphor