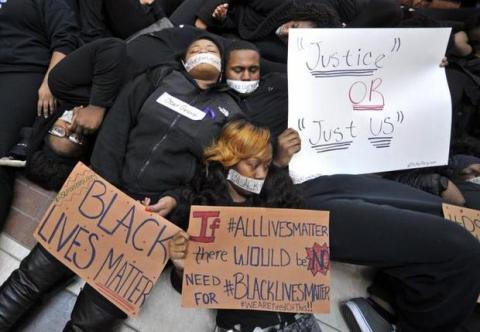 as I stared at my skin in the mirror, I asked myself why.

They told me it would be hard,

they told me the side effects might be harsh,

but they never told me

my disease would make me die.

In America, people treat being black as if it is a disease.

They look at me funny,

they call me names,

they give me stereotypes that were predestined from birth.

Then the white man tells me I'm no different,

and as I see the lifeless bodies of my culture on TV,

they think I'm supposed to be pleased.

Each day I have to fight harder to live up to the standards of the privileged society around me.

My opinions must be surpressed,

I'm expected to leave the racial angst to ache in my chest,

when my intentions are at their best,

I am seen as a public threat.

The white man has permission to flip over cars

and set items in the middle of a street on fire

without the label of a riot,

but if I express anger with physical action,

I'll find myself in hand cuffs searching for a lawyer to hire.

They treat being black as if it is a disease.

They make us pretend the issues and hardships do not exist,

as society is taught that everyone is equal.

But if I am not disadvantaged, or disprivileged

then tell me what's happening to all of my people?

But if being black is a diease,

as one of the five percent of African-Americans on my campus,

I will stand out.

I will not be violent,

I will not shout,

But with the power of my pen, my brain, and my education,

I will be heard, and

I will use society's standards to exceed the expectations of the nation.

If being black is a disease,

then the side effects will be overcome.

I no longer see my race as a struggle,

I see it as a race that must be won.

I may not have the privilege

as the other runners do,

but regardless I'll come on top

and be more than some black girl that everyone knew.

If being black is a disease,