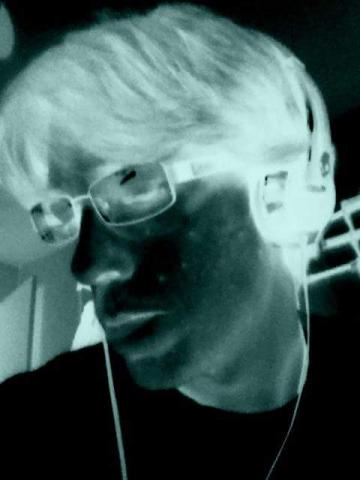 Blushing his mind was suddenly buzzing

With a rushing kind of thrumming thundering

His hands fumbling with wistful whispering

As he stilled listening

Quivering in attention to her symphony

Moving so fluidly it seemed

She was perfect symmetry

If symmetry could sing infinitely

Red lips and a tongue ring

As he tried to capture her being

In pages of calligraphy

And writing only two words worth keeping

But even that seemed to be a study in futility

Close, but still just a facsimile

Now even attempting such a thing

When she’s not in the scene

It was a crushing ruptured something

Lusting up toward her but just...brushing

Are the color of her eyes for one thing

Her makeup was made of the constant fluttering

Of a thousand different shades of butterfly's wings

Her body wrapped with swirling images of things

Half shown only teasingly

She wore a meticulous modesty like an alluring anthology

Audibly dancing the lines of an infatuation with her body

Calmly, and without a hint of apology

Never did they speak

But he thought of her with a quietly

Her motion kept within a distant proximity

Close, but still just out of reach

Even the fleeting demons seemed to freeze

The needle points of their teeth not quite so pressing

Folded and creased with every word that she’d speak

He wanted God but was stuck in the ministry

She was the girl of his dreams

An Ideal over which he found himself continuously

In prose and in poetry

She was the standard for every real meeting

The source of a lonely rising anxiety

Only interspersed by other versions sporadically

She was a masterpiece paraded in pageantry

Absently grasping at the fantasy of his own imagining

She was a fiction with...

And eyes the color of crystallized starlight

Too caught up in the dream

To realize he was sleeping

He fell in love with a faery

He just couldn’t see her wings

Poetry Slam:
Slam on Miss America
This poem is about:
Our world
Poetry Terms Demonstrated:
Imagery