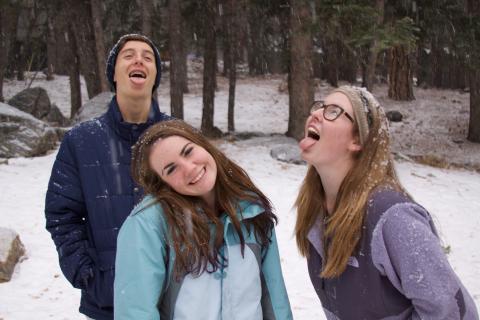 She was a small child of seven, loved learning and writting

A smart child for being in second grade

She wrote about Autumn while her parents were fighting

She thought she had it made

She was a slender, intelligent fifth grader

She wrote poems on her binders while bored in class

Most were about alone and transparent, but she got over it later

But still, her emotions were as translucent as glass

She was a lonely sixth grader who just needed a friend

She lived in a new town now, and wrote to not feel empty

She wrote poems about life, she didn't know what she wanted to be

She had a 4.0, and she ran faster than her entire school

She cared so much what others thought, she felt like she was lying

She dreamed of high school and of becoming cool

She wanted a new beginning and looked forward to being older

She didn't expect that she'd ever write about wanting to die

And she didn't realize how everything got colder

She wrote poems to Delia, and knew she was in love

With a girl who made her feel like a burden

She wrote poems about darkness, with nothing above

Things would get better but she still wondered when

She wrote poems about people who didn't deserve her

She wrote about her monsters and her happiness, which was dying

She wrote about everything being a blur

It was difficult to stop crying

And then she was fifteen, and less of a grenade

She froze off her emotions and wrote poems about being numb

Because she knew no one would have ever stayed

She knew she was happy, but she was also quite dumb

At sixteen, she wrote for her community and her passion

She wrote for the ones who were like her

She spoke out for the silenced, and wrote poems about the rainbow behind the sun

She stood up for the ones who were always unsure

And suddently a boy pursued her, and she thought it was real

She let her heart defrost, and let go of the fear

She thought it was mutual how he made her feel

She started going to parties, and each party she would experience loss

She started drinking vodka, and then she lost something that might have been

She lost everything that made her even want to begin

She wrote about heartbreak, and being led on

She wrote poems about not being enough

And poems about dawn

She drank a bottle of wine and wanted to forget

Now she is seventeen, and she writes poems about being hurt

Poems about what might have been, and what will never be

But finally she realizes, not everyone will treat her like dirt

There are people that love her who she can finally see

She wants to write for those who feel the same, because she'll never forget

How the poems evolved from being dreams to coping with strife.

Poetry Slam:
You, Me, and Poetry Scholarship Slam - CLOSED
This poem is about:
Me
Poetry Terms Demonstrated:
Metaphor