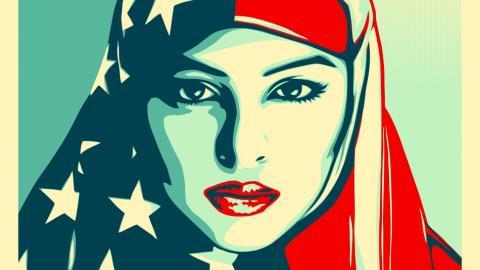 I pledge allegiance to the Racism of the United States of America,

and to the Rich, White, and Wealthy for which it stands,

one Nation under a Christian God,

with liberty and justice for some.

My country ‘tis of thee, sweet land of milk and honey

Carved from the ships of pilgrims,

who raped the mother land’s womb

Stuck huts and pushed her children,

Scattering them to her infertile soil.

My country ‘tis of thee,

Ripping them from her spirit,

Housed, in lines, White man—no fear. He houses in lines.

My country ‘tis of thee,

A diaspora of African children running to her shores, as Charon carried them—

My country is for thee,

Push those of Cherry Blossom descent,

Into lines—bars. We will prison the Japanese again.

O say can you see, the backs of slaves. Glistening in cotton fields, building up this nation.

My country ‘tis of thee. A land

Where the KKK fonicates with lawmaking.

Where brown boys are shot dead before 20

The Civil War! Was fought for the slave market.

But the Civil War! Is still being fought today,

It is still being fought today

Because a Man who calls Mexican people, rapists, can be elected in the “progressive”

Because a Man who attempts to ban a religion and its people, can be elected in the “progressive”

Because a Man who can mock those with disabilities, can be elected in the “progressive” 21st century.

Because a Man who can welcome Caitlyn with open arms, cans still propose to close bathroom doors, can be elected in the “progressive" 21st century.

My country has a problem and she has infected us all

Because colorism is a problem when

But race is a construct, makes us different but does not define

Cut my arm and the blood will still run

But don’t close the wound and I will still hurt.

My country has a problem,

And she is sick from the roots of a history,

Slavery and Strange Fruit a singing

And Japanese internment camps. Discrimination of the Peonys,

Brock Turner who just wanted to “get off”, got off and away,

Commit crimes at the same rate for a longer fate.

The war on drugs!

Was and is a war on the people

It is not safety,

For the color of your skin.

But, don’t fear for America she houses in lines

Builds prison’s based on the results of our minds,

Gives us disproportionate ghettos and expects us to climb

Pushes an opiate and expects us to find

My country tis of thee, a country that does not understand liberty

We are all trying to paint our own rainbow. Not too long ago

Say their name, but the names begin to look like dominoes, because I cannot say them all

Because the number of unarmed killed is on the upper side of 900, and that’s just for 2016.

Before we are seen? Stop shooting us, is not a foreign language.

But the Civil War! Is still being fought today,

The kinky twists of my hair.

But the Civil War! Is still being fought today

As they love your culture

And build a wall to its people

Because no human being is illegal,

Give me your tired, your poor,

The wretched refuse of your teeming shore.

Send these, the homeless,

For the sake of an ideology, while refusing and neglecting our civilian casualty. There is blood on our hands.

We cannot lift the lamp beside the golden door for some.

The Civil War! Is still being fought today

And I have seen the sickness.

For when Gil-Scott Heron said Freedom, Free-Doom, I think he also meant to say there is no Free Truth.

There is no Truth without a fight,

And we will fight

Because the Civil War! Is not over.

They say you can come and worship here,

No church no state

Until they change the oil, to something much more soluble.

No church no state

So much better than “Sharia Law”

But if Oedipus is corrupt he will soil the land, it is not the religion, it is man,

So we will fight. For Truth!

Because the Civil War!

Is being taught in classrooms, in restrooms, back alley’s and offices.

And we are fighting

But most importantly we are loving.

That is blind to the truth,

To mask her ugly truth.

But my country ‘tis of thee, land of milk and honey

Scathed from the Red man

And raised on the backs of slaves

Who were written as myths

Lost in textbooks and on holidays.

But my country tis of thee

And the youth will set us free.

Poetry Slam:
America the Great?! Scholarship Slam - CLOSED
This poem is about:
Me
My country