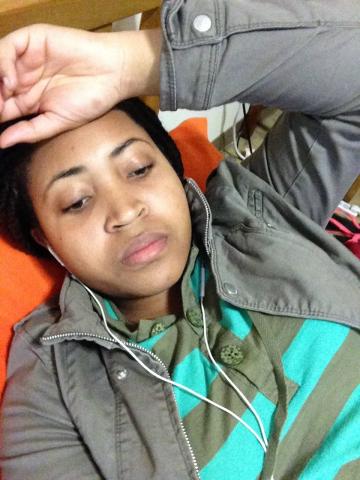 Love (Shake my head); when I was fourteen years I thought I found love,

Love like: Fairy Tales, and all that Fucking Bullshit people allow.

To me he was sent from God from the heavens above,

So true and pure to me like a Dove.

But then, after time went by,

And I started to realize, that I had been victimized,

With his filthy lies,

I was used, hurt, lied to, and treated like dirt.

How could he have done this to me?

Silly me I wanted his damn love.

I was so kind, affectionate, and did everything he wanted me to be,

His princess, his stealing honey bee.

I called myself that ,because I stole money from my Grandmother,

He used it to buy drugs; I really thought I was satisfying him.

For I was stupid, dumb, and peer pressured into wrong doings,

But whose fault is it anyway? Me, my doing.

I told myself I created this stupid mess,

But I tried not to confess, because my truth would undress my silliness.

But guess what? My Grandmother never found out,

She died rest her soul; she was the one I couldn’t live without.

She was a Mother to me, a pure true soul,

A woman I called my forever Mother, my gold.

Now that she’s gone I’m forever trapped with my lies,

Under my beautiful forsaken eyes,

And now she would never know, why?

She would never know why I stole that money,

But years passed and I got through that.

I now know what the meaning of love truly is,

It’s not for the money or material things.

I started to accept my flaws and repent,

I allowed myself to do that with God’s powerful strength.

The Lord gave me another chance, to show who I really am.

A sinner that has been saved to see her better days.

So to my ex, who I wrote this poem to,

Do you look at yourself in the mirror?

Do you see your flaws?

Do you see the guy you really are?

A player, not a comforter,

A sick in the mind individual,

That has reached his max potential,

With his lies of no return.

But I pray for you,

I pray that whoever has you can realize quickly,

And would definitely not be victimized.

And treat you like you’re needed to be treated.

So that his lies can eventually break apart.

You shall have a new profound heart.

So go out there and love,

Don’t love for the money,

But love because you have someone that wants to love you unconditionally.

Your whoever it maybe future honey.

I’m now thankful that I had you in my life, so that I can learn from my mistakes.

And know the true meaning of love without the pain.