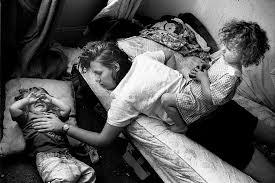 It started out oh so long ago, the fog behind leaves a clue,

but not something resolute.

The times of the day were directed by the signs, yet those

Men working with their hands, women & aprons in the

Neither parents stepped up to the mark.

Daddy gone a fiddling some government cheques, and

bed hopping in some other ladies bed.

How were we 3 siblings meant to cope with my

dummy to share between us, and some fairy liquid

The days were long being left alone, laurel and

hardy, pink panther on black and white TV, was

our food and receipe.

Neglect and hurt were what we became used too.

The tears ran dry, our

screams went hoarse too , left with the stale state of

unhappiness, as some kind of constant flu.

The pain went deep, and became our badge, visible

Soon, others treated us the same way,

not quite with you .

Looking in the mirror at the empty vessel staring back at

me, who is this person meant to be?

Colourless and sunken where the characteristic trait .

This was the look of the day, Not hungover or

Surely something had to give, if this went on forever,

At snails pace the past was faced.

Shock and trauma were blasted by hypnotherapy

whereas reciting poetry brought me out of my

The pain was intense , the nights were long,

Over time my state became calm,  the past was going,

Still something lurked beneath my emotional brow .

I couldn’t work out what was holding me back,

this unhappiness I felt, was keeping me ‘jacked’

Going back to the drawing board of therapy,  tired,

Sitting in the chair of deep despair, tears flowing down

Finally , the ‘hidden script’ was revealed, what was

”All my life I’d let people make me unhappy”.

This became my state, my normality, until the recognition

did something very strong to me .

The start we had, was no good,

Becoming stuck Was what it took.

The freedom I feel is a joy, to be in sync again, to live once more.

Nick Davies of Warwickshire School of Hypnotherapy ,you are a

genius to me . To be able to see the cure before my eyes and

guide me into oneness will be cherished for ever, you’ll see.

For those who are struggling, this is a reference to see,

that you are not alone in this battle with Nick as

Poetry Slam:
Slam for Suicide Awareness and Prevention
This poem is about:
Me
My country
Our world