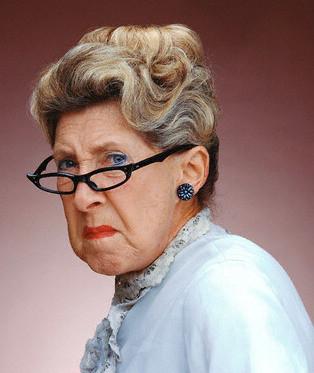 You could hear her heels click as she walked. A statue of a woman who could walk the walk and talk the talk.

She did her magic for the 5th grade class in classroom 409.  White, grey hair pulled back in a bun and a stare that would bring tingles down your spine.

She didn't take any back talk, she didn't have much fun. For any second her back was turned, Mrs. Brown's 5th grade class would come undone.

So, a clever young boy  by the name of George lost a bet on the playground. According to Bill, George's best friend his punishment was silly and sound.

He has exactly half a day's time to organize a list of exactly what he would say. His "forbidden" statements written down were sure to make the class laugh along as his jokes and statements were properly, on old Mrs. Brown, displayed.

Mrs. Brown had to be close to seventy-five years old at this scheduled  time. And George and Bill knew deep inside that this list would be handled as a school crime.

After George made the list of 'not nice' things to say to Mrs. Brown he tucked it inside the pocket of his coat. He built up the nerve to attempt a task, but with a stomp of her heels and a shake of her head, the words wouldn't come out of his throat.

It was now or never according to Bill and so George must comply. With all his pride he stood up tall; Mrs. Brown he would have to defy.

At the start of Monday morning, homework was being taken up. When Mrs. Brown got to George he replied that it was eaten last night by Benji, his new, playful Poodle pup.

With an ever so spiteful glare in her senile eyes, she permitted the other kids to go outside and play.  As George grabbed at his coat to put it on, Mrs. Brown snatched it off, instructed him to write the word, 150 times, 'O-B-E-Y.'

While all the other kids were swinging the highest and sliding down the slide, little George was stuck sitting, pencil in hand, while the other kid's played and laughed outside.

After recess George stood up and was told to apologize for his rudeness to the whole entire class. As Mrs. Brown waited patiently, instead George opened his mouth and out came a grizzly belch and didn't even excuse himself after loudly passing gas.

Out of the corner of his eyes he caught a glare of his antique teacher talking under her breath. The class giggled softly while Mrs. Brown carried him to the Principal's Office where George was sure the punishment would be 5 paddle strokes to his rear end causing a slow and sudden death.

When George walked back into his class, a big red stinging mark covering his tush. He caught her slightly off guard when he appeared back in class, laughing, indeed testing which buttons he could sussessfully push.

Although George was kind of tired he charted his next mission that he had to complete. But as Mrs. Brown ended her afternoon math assignment she was interrupted by the snores coming from an exhausted George who was apparently fast asleep.

But, Mrs. Brown was a clever old soul and she didn't like being disrupted as she taught her final subject. She yanked her 12-inch wooden straight edge ruler, smacked him hard across the wrist demanding good, simple respect.

By the conclusion of that Monday, George was feeling a bit homesick and sore. George wasn't used to being bad, defiance was a trait that his mother and father had never ever stood for.

Right when he was approaching the final exit to his day. Mrs. Brown stood in front of him and demanded 15 extra minutes after school, as punishment,  he would have to stay.

With his pride in his backpack he had nothing else left to lose so he dealt his cards once more. In the midst of a little boy temper tantrum he removed his entire backpack contents and dumped them on the floor.

Mrs. Brown had never seen such defience and it was something she defintely didn't allow. But, insubordinate George rolled his eyes, yawned, stretched then merely stood atop his old classroom desk and gave his elderly teacher a bow.

His 15 minutes were up and he skipped his way out of the confining classroom. Tomorrow, he decided, he would happily toss all those silly comments out the door, never to be seen again and 5th grade, as he knew it,  would then resume.

George had painstakingly paid his debt and not another discussion or word would ever be said. But the teacher wouldn't witness his transformation on Tuesday morning because she had a melon size cancer in her stomach that killed 5th grade teacher Martha Brown dead.