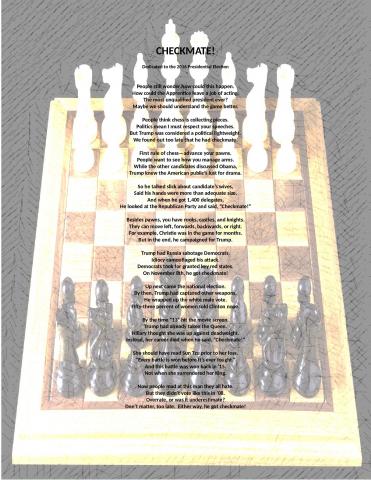 Dedicated to the 2016 Presidential Election

People still wonder how could this happen.
How could the Apprentice leave a job of acting.
The most unqualified president ever?
Maybe we should understand the game better.

People think chess is collecting pieces.
Politics mean I must respect your speeches.
But Trump was considered a political lightweight.
We found out too late that he had checkmate.

First rule of chess—advance your pawns.
People want to see how you manage arms.
While the other candidates discussed Obama,
Trump knew the American public’s lust for drama.

So he talked slick about candidate’s wives,
Said his hands were more than adequate size.
And when he got 1,400 delegates,
He looked at the Republican Party and said, “Checkmate!”

Besides pawns, you have rooks, castles, and knights.
They can move left, forwards, backwards, or right.
For example, Christie was in the game for months.
But in the end, he campaigned for Trump.

Up next came the national election.
By then, Trump had captured other weapons.
He wrapped up the white male vote.
Fifty-three percent of women told Clinton nope.

By the time “13” hit the movie screen,
Trump had already taken the Queen.
Hillary thought she was up against deadweight.
Instead, her career died when he said, “Checkmate!”

She should have read Sun Tzu prior to her loss.
“Every battle is won before it’s ever fought.”
And this battle was won back in ’15.
Not when she surrendered her King.

Now people mad at this man they all hate.
But they didn’t vote like this in ’08.
Overrate, or was it underestimate?
Don’t matter, too late. Either way, he got checkmate!