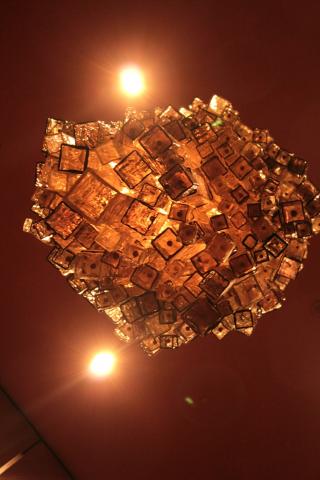 Orange light passes slowly on; as a slow brook passes an even slower traveler on his melancholy way through life.
The light came from shapes, out of focus to the stranger, trudging the late streets of night; large ominous,omniscient,and oppressive poles, stalking the wanderer on his way.
Was it the light that passed, or was it he?
The lone figure couldn't tell.
Alone was this shape, a shadow of potential seen only by The Divine.
They marched, as death, alongside the traveler, these lights did, but no one took notice, save the broken soul, alone.

Walking through pain, walking through sorrow, walking through Hell, walking to no tomorrow.
These orange lights kept drifting by, with maddening persistence,
and even still more maddening slowness and sureness of their path.
On and on and on and on.
Black, then orange light, slowly...slowly..brighter..and brighter..
fading now..a bit more...almost gone......
black again.
Over and over the pattern repeats.
Again and again, the saddened walker moves slowly from dark blackness,
to bright orangeness, and back again into black.
So slow that he could barely breathe,
so slow that he could barley see,
so slow that the movement felt like stillness, and the stillness like movement.
Until the dawn came.
And only the God of creation,all,
knows where this poor soul will go,
and from where the saddened traveler came.