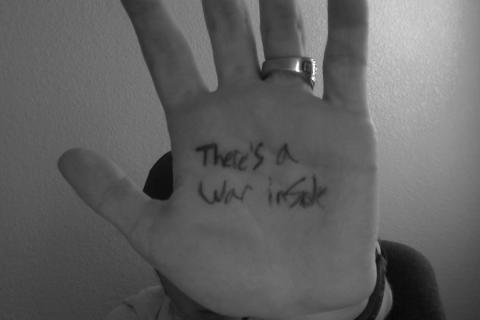 at a crossroads, where the roads diverge into a yellow wood

I, a man, flip a coin indecisively

the heads and the tails both show in His hand

which Tea he will make rests in this

He looks to the heavens, down at the earth, does not decide

I wait for Him, He waits for himself, too often is He here

to His Cave he retreats, uncomfortable and dear

He angers me, evokes sound and fury from my soul

spouts Ego and Id, Didi and Gogo, Left side Right side

yells deranged "am I Hamlet! such a waffling prince was he"

yet his madness lives inside us all, or maybe not...

He finds his restless sleep, now there is only me

but how can a man find peace this way?

Black or Green, the choice itself matters not to me

without Him clear water I'll make

but the taste won't curb the savage crave

and the steam won't mend the mind depraved

another failure, another day

I'll find him and shake him and move him until

I find nothing can move the wavy still

the Tea's not steeped, nor cup filled

I pray next time the Tea's to be made

maybe, just maybe Gautama or Christ will be here

fill my cup with bittersweet nightshade

then after this, no more Tea making I fear