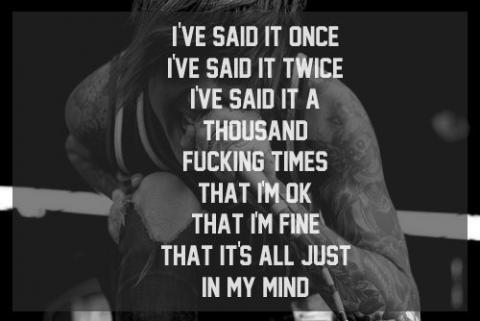 They called me an attention seeker, told me it was all in my head

Little did they know, all my life consisted of was crying in bed

So many times I convinced myself that there was nothing wrong

I wanted to believe that was the truth, but I’ve been like this for too long

Months and months passed by and I kept getting worse

This place became comfortable to me, a place that I could easily be immersed

The days went by and isolation became my best friend

My mind would tell me that this suffering has no end

A therapist told me that my brain was sick, during our session

She diagnosed me with this thing called depression

I was told I had a chemical imbalance in my brain

I was ashamed, embarassed and told no one I was mental

Being mentally ill is something most people don’t understand

They do not understand that the severity is grand

January 5th, 2014 is the date I attempted suicide and a day I’ll never forget

But my life became a rollercoaster of emotions. I’m fed up with it all, goddamn!

Why did this have to happen? When did I become so fucked in the head?

To this day, there are several moments where I still wish I was dead

This will never be an easy journey, and it is one that will never end

Until you walk in my shoes, you’ll never know the despair that has come upon me

Depression will not stop me; this has only pushed me to become stronger