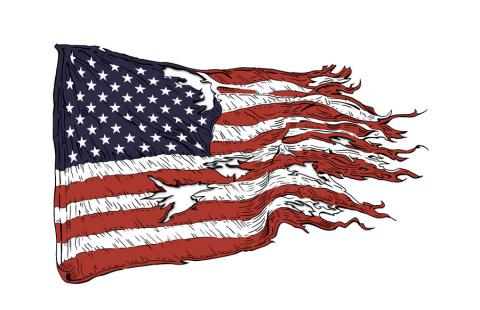 America, the land of the free and the home of the brave,
Where no one ever had to be afraid.
America, the treasure trove of opportunity and equality,
Where everyone could turn their dreams into reality!

We used to be an example of justice and responsibility, righteousness and unity!
But now? Now we have police brutality.
Colored people being tortured or killed for the slightest blunder,
Why do they have to suffer Racism's anger?

Innocent immigrants who paid their taxes, without any government aid,
Are being driven out of their homes; all victims of a raid.
Increasing attacks on multiple races, LGBTs,
Flourishing with hatred and insensitivity.

Affordable healthcare, women's reproductive rights, Planned Parenthood- All being thrown away!
'Reforming' (ruining) the EPA!
Legalizing dangerous pesticides to be leaked into our food,
Who cares? It means more money. Don't spoil the mood!

We used to be the leaders of clean, renewable energy.
Science and technology- the foundation of this country.
We wanted to resist climate change,
Now, all we care about is war, trade, and exchange.

America, blest with victory and peace,
Is now falling apart, piece by piece.
Wake up! It's not too late,
To become what we used to be- America, The Great.

This poem is about:
My country
Our world
Guide that inspired this poem:
How to Enter a Poetry Slam
Poetry Terms Demonstrated:
Rhyme Scheme